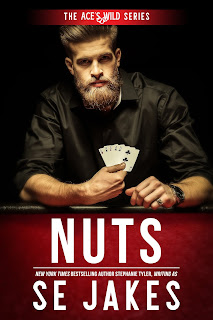 Nuts is penned by SE Jakes and is the second book in the multi-authored Ace's Wild series. Having only read this story among the ones that have already been published, it's safe to say that it works quite well as a standalone. This is a friends-to-lovers romance, and when you read Jagger King and Preston VanValen's story, you'll see that theirs was a long time coming. When Preston was the new kid in the public school that Jagger went to, he stood out like a sore thumb, what with his polished ways and how he obviously came from money, but then his family name alone already made that clear as day. After Jagger rescues Preston from a bunch of bullies, not only does he offer Preston his protection but his friendship as well. They were the unlikeliest of friends--Jagger was the son of an infamous bookmaker and fixer while Preston was the scion of Boston blue bloods--but their friendship withstood Preston being disowned and becoming part of Special Forces and Jagger taking over the family business and owning an private sex club. Can it handle, though, one kiss that leads to a year-long self-imposed separation?

While reading this book, I found myself rather satisfied and most of that had to do with the strong connection the main characters, Jagger and Preston, shared. Thinking back, however, there were several things that niggled, almost as if certain revelations didn't make as much sense as I thought they did. Maybe it was because I so desperately wanted these two men to get their much-deserved--and long awaited--happy ending given everything that they've experienced over the years. As far as the romance aspect of the story was concerned, I was pretty much a happy camper, and I don't really have much of anything to complain about as far as Preston owning up to his not-so-platonic feelings for Jagger. It's the suspense part that has me waffling, no thanks to particular bits of information that were revealed, yet don't really make as much sense in hindsight. Yeah, I admit it: the sex and romance clouded my thinking there for a good, long while. I'd like to think, though, that had this been a full-length novel, the entire story line would have been fleshed out more. In its current state, however, Nuts garners 3.5 stars. ♥