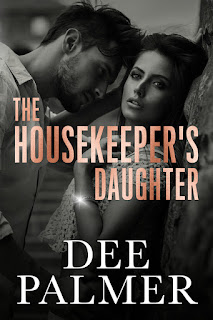 Originally released as a two-part duet entitled Wicked Little Games early last year, Dee Palmer has brought both halves together for a full-length novel now titled The Housekeeper's Daughter. I never read the books when they were published last year, so I can't do really a compare-contrast thing here and pinpoint if anything was changed. This review is based solely on my reading experience with this full-length novel, which is actually a REALLY long read, and I'm talking a total of four hours of me totally absorbed by everything going on in this book. As always, this author made the time and effort I put in worthwhile, thanks to a well-written romance about a girl who fell in love with a boy only to have the boy shatter both her heart and her trust. After several years pass, that girl, now a young woman, has a plan of revenge ready to put into play, but her broken heart has not quite learned its lesson.

I know it isn't mentioned in the blurb, but just a quick heads up: this book does involve a love triangle and it's a seriously complicated one. Tia Parker loved Atticus Kruse--aka Cass--as a girl but something happens that adversely affects her life over the next few years. When their paths cross once again, Logan Beckett is now a presence in Tia's life. I'm going to stop there because any other details may end up spoiling this book for those of you who have yet to read it. Tia is a young woman who's been hardened by her experiences post-Cass, and that includes the events that led up to the implosion of her life, but while there are times she could be frustrating, I liked her fiery spirit. There were moments where my affection for Cass was touch and go, although he did ultimately win me over. And then there's Logan... Le sigh. If there was one character that I would choose as my favorite, it would be him, hands down. All three, however, are complex, multi-layered characters, which I love, because nothing beats peeling back those layers as we get to know them better. Expect the unexpected with The Housekeeper's Daughter. Five stars. ♥

Purchase The Housekeeper's Daughter on Amazon.