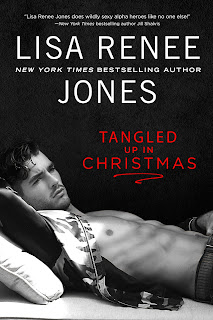 Tangled Up in Christmas is the second novel in Lisa Renee Jones's Texas Heat series, and it certainly was following in rather big footsteps, thanks to the awesomeness that was the series starter, The Truth About Cowboys. This is a second chance romance featuring Roarke Frost and Hannah (not sure if Hannah's last name is mentioned in the book and I just missed it or not, but if it is there, feel free to let me know via the comments!). Once upon a time, Roarke and Hannah were very much in love and set to marry; that is, until Hannah receives an anonymous email containing a photo of Roarke with another woman. Feeling betrayed and heartbroken, Hannah leaves their hometown of Sweetwater, Texas, and starts over in Los Angeles, California. When her career suffers a major setback, Hannah returns to Texas and finds herself agreeing to coordinate a Christmas event in her hometown of Sweetwater. The catch? Her ex is part of the committee and she'll have to work with him in order to get everything finalized. Hannah has no plans of falling for Roarke again, but plans don't always go the way you hope they would.

Two books in and I've been enjoying the heck out of Lisa Renee Jones's Texas Heat series, which are a welcome change of pace from her usual romantic suspense fare, not that I haven't liked reading those as well. I simply appreciate Jones's flexing her creative muscles and giving fans and readers something different now and again. Published by Entangled via their Amara line, this series is lighter fare, although there's just enough angst thrown in to satisfy an angst addict like me. This second book was well-paced and had a couple with history, both good and bad. I liked both Roarke and Hannah, and the rekindling of their feelings for each other was a given even though Hannah getting past what she believes is Roarke's betrayal wasn't rushed, which is another thing I appreciated. There's also a family feud that comes into play, and how that affects the renewed relationship between Roarke and Hannah was certainly interesting. It was nice to have Jason and Jessica--and Martha!--as part of Tangled Up in Christmas, adding even more Christmas spirit, plus there's a fun bonus short story, Santa Baby, included! 4.5 stars. ♥