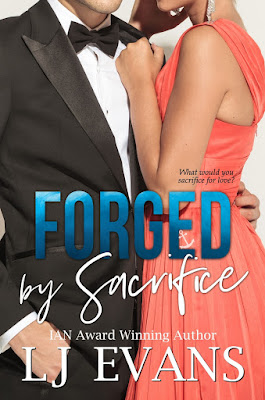 About Forged by Sacrifice
What would you sacrifice for love?

Leaving his Navy career and his assignment at the Department of Defense behind, Mac Whittaker is ready to join his family on Capitol Hill. He’s just missing one thing―a woman he loves at his side.

He wants the American fairy tale.

Georgie Astrella has put her life’s goals on hold for way too long. She’s finally putting away her cutting shears and curling iron to bury herself in justice and the law.

She certainly isn’t looking for love.

Fate has other ideas… throwing them together until neither of them can walk away from the attraction that thunders across their souls… from the truth of how their hills and valleys fit perfectly together.

But her family’s past would make his future an impossibility.

Will Mac give everything up for her? And more importantly, will Georgie let him?

From award-winning author LJ Evans comes a story of family and sacrifice inspired by Lewis Capaldi’s “Bruises”. You won’t want to miss this inspirational, military romance. 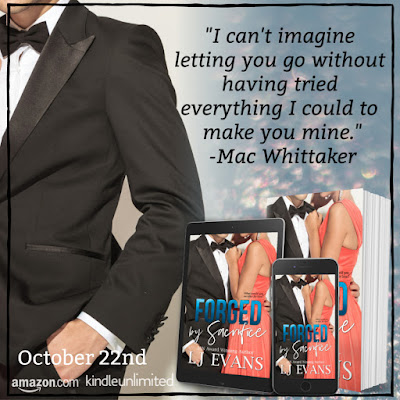 Read my five-plus-starred review of Forged by Sacrifice.

Add Forged by Sacrifice on Goodreads. 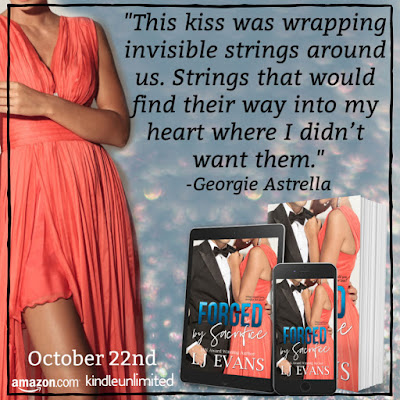 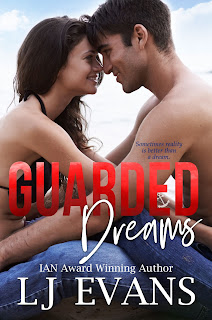 Get the first book in the Anchor series for $2.99 today only! 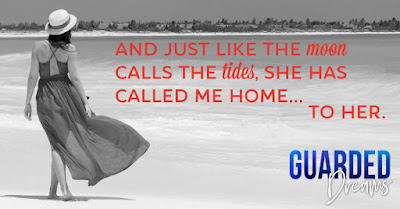 An Excerpt from Forged by Sacrifice
“I’d really like to kiss you,” he said quietly.

I looked into his eyes that were the color of the sky and the sea all rolled into one. His face was so gorgeous, with its day-old stubble and square planes, that it was like looking at a piece of art you’d never expected to see up close in person.

“I’d really like you to kiss me, too. But let’s face it, it isn’t a good idea,” I answered back, unable to deny the attraction that existed between the two of us from the moment we’d met in my salon two years ago, regardless of the relationship I’d just left behind.

His head inclined in silent agreement. It wasn’t a good idea. Disappointment curled through me even as I knew it was better this way.

His hand moved to caress my cheek. Gently. Soothing.

“Can I ask why you think it’s a bad idea?” he inquired.

His voice had turned a notch deeper in blatant desire, making my heart pound against my chest in a heavy beat that denied my words. I ached to kiss him. To feel those almost too-perfect lips against my own. To feel the strength that poured from him, in muscle and character, reaching out to touch my soul.

He nodded again, that new and unfamiliar feeling of disappointment reaching up into my throat at his action. My body didn’t want him to nod, but my brain was still ruling my movements.

“One kiss,” he muttered, a finger traveled to my lips, caressing the bottom one with a gentle touch like the one he’d used on the tomatoes the day before. Surprising. Sexy. My breath escaped in a gasp that sounded almost like a moan.

And then his lips were on mine, just like the touch, gentle and yet full of heat, longing filling us both, desire escaping from us and mingling in an excursion that felt like heartbreak and loneliness and promises that would never be. The gentleness gave way to a fierceness that was as unexpected as the gentleness had been. His hand went to my lower back, pulling me toward him tighter so that our bodies and curves joined in a way that felt like opposite ends of magnets finally clicking together. Parallel forces drawn, as if by physics itself. 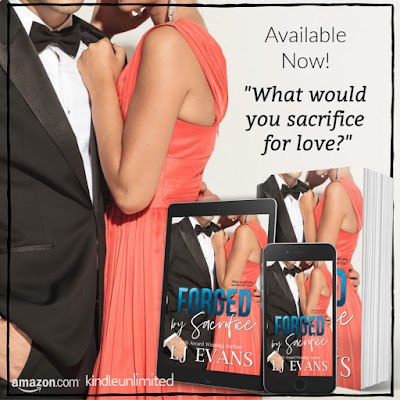 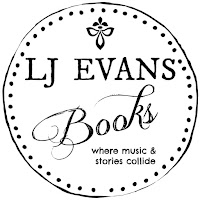 Award-winning author LJ Evans lives in the California Central Valley with her husband, daughter, and the three terrors called cats. She's been writing, almost as a compulsion, since she was a little girl and will often pull the car over to write when a song lyric strikes her. While she currently spends her days teaching 1st grade in a local public school, she spends her free time reading and writing, as well as binge watching original shows like The Crown, Victoria, Veronica Mars, and Stranger Things.

If you ask her the one thing she won’t do, it’s pretty much anything that involves dirt—sports, gardening, or otherwise. But she loves to write about all of those things, and her first published heroine was pretty much involved with dirt on a daily basis. Which is exactly what LJ loves about fiction novels—the characters can be everything you’re not and still make their way into your heart.