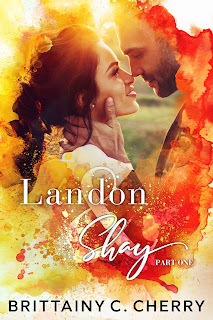 Everyone was staring as Shay Gable wrapped her arms around her sworn enemy. Everyone looked on as Landon Harrison wrapped his arms around me, too.

He hugged me back.

Oh my gosh, he was hugging me back, and that made me tug on his body even harder. There was no way to tell where his heartbeats began and where mine ended. It was if they were beating as one, as if we were two willows tangled up with each other.

You'd think I'd be more than familiar with just how awe-inspiring an author Brittainy C. Cherry is, yet here I am, gobsmacked and at a loss for words. I mean, her books have made me cry before, so the fact that tears were shed this time around was nothing new, but by the time I'd gotten to the end of this novel, there was an ache in my chest and intermingling thoughts and emotions swirling about. Maybe it's because Landon & Shay is a love story told in two parts, and while this isn't the first series the author has ever written, this is the first duet featuring a continuing story line with the same main characters. So, there was a cliffhanger of sorts, and this was a cliffhanger that was both heartrending and hopeful. There were still unresolved issues and a definitive need for some closure.

Shay Gable and Landon Harrison do not like each other. No, scratch that. These two hate each other, and it's not a secret either. Opposites not just when it comes to their outlooks in life and personalities, Shay and Landon have different home lives and circles of friends. When a challenge is put before them, it's one that piques their interests: to see who could make the other fall in love with them the fastest. Both believe it'll be an easy enough win--after all, there's no possible way Landon would ever fall in love with a girl he hates and vice-versa. But the more time Landon and Shay spend together, the more they get to know one another, and that's when the impossible happens: they fall in love. However, losing this game could mean losing their hearts and never, ever getting it back.

Le sigh, but how I fell for Landon and Shay and their story. This takes place in 2003 when they were both going to the same high school--Landon being a senior, and Shay a junior--but while these two may be teenagers, they face struggles that could bring those much older than them to their knees. Brittainy C. Cherry has penned a story that doesn't make you pity either of the main characters, but it does make you empathize with them and admire the courage that they cultivate within themselves once they're in each other's lives. Landon's struggles with his depression in particular are noteworthy, and Cherry doesn't sugarcoat when she describes the darkness that lingers within him. While Shay has a sunnier personality, she has her own issues that are quietly eating at her, too.

With this being a spin-off of Eleanor & Grey--Eleanor Gable is Shay's cousin and Greyson East is Landon's best friend--I loved getting glimpses of those two previous main characters. Having said that, however, let me reiterate that Landon and Shay's story stands alone and does so impeccably well, which surprisingly enough, isn't an easy feat. Landon & Shay: Part One ends with somewhat of a cliffhanger, and while my heart ached over the the necessary choices that both main characters had to make, there's an inkling of hope because of the author's emphasis on healing. I so adored this book, and it's a five-plus-starred must-read! Part two releases on December 4th, so that's a bit of a wait, but I wouldn't be a tad surprised if--when!--Brittainy Cherry makes it worth our while. ♥