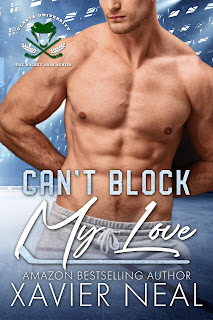 It's more than two years since I read my first Xavier Neal book, and now, my second read from Neal is a series starter entitled Can't Block My Love. The Hockey Gods series is about Vlasta University's hockey team, the Vlasta Vipers, who have a storied past that made them the envy of many a college and university hockey team. Unfortunately, those glory days are long gone, and even as the current team struggles to regain the prestige and luster of the past, the players remain part of the upper crust in school's student hierarchy--a fact that Remington Ronald Rutledge the Third knows well. Unfortunately for him, his new coach isn't as big of a fan of his bad behavior, and he makes it abundantly clear that if Ren hopes for playing time on the ice, he's going to have to do the time, aka community service. He's assigned to Petropolis, and that's when he meets someone from his past: Poppy Diesel, aka the girl he called Hootie when they were kids, only Ren doesn't recognize her. He hopes Poppy'll give him an easy out volunteering, but Ren's about to learn a thing or two about playing by someone else's rules.

This was a fun read and a breath of fresh air after going through quite a few heavier reads lately. Ren was certainly every bit the bad boy that he was reputed to be, and his cocksure attitude had me very much tempted to smack him upside the head. Fortunately, the guy does mend his bad boy ways and is inspired to become a better man after Poppy comes back into his life. Poppy was someone who saw beyond the facade and she had faith that Ren would get his act together before it was too late. These two had a good connection and their banter was entertaining, which I consider a must when it comes to romantic comedy reads like this one. They may not have seemed to have a lot in common, but there's a kinship there, possibly due in large part to their history with one another. Aside from this having romance, the story is also about redeeming oneself and wanting to be more than what one is perceived to be. Because I'm a sucker for books that include animals in them, I can't help but give bonus points, especially since they're an integral part to the overall story. I'm giving Can't Block My Love 4.5 stars. ♥