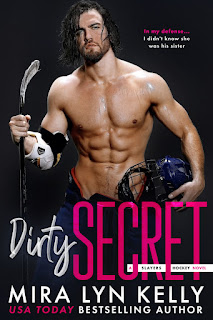 “I did something stupid, Vaughn.” Her words are a whisper and she can't look at me.

“Whatever it is, it doesn't matter. If you need to tell me, I'll listen. But it won't change anything. Do you understand?”

Her chin starts to quiver, and I can't take it. “Allie, you're killing me.”

Eyes locked with mine, she slowly shakes her head. “I didn't mean to do it. I knew better, but somehow...I fell in love with you anyway.”

This book! Gah! This was the perfect book for me to curl up with on a quiet Friday night, with nothing but the hum of the air conditioner and me snuggled underneath a blanket and propped up by an array of pillows. Dirty Secret is the first novel in Mira Lyn Kelly's Slayers Hockey series and it's also a spin-off of her Back to You series, which was released last year. I've read many a hockey romance book over the years, but Kelly's new series starter is definitely one of the more memorable ones that I've had the privilege of reading. This had all the damn feels bolstered even further with exemplary writing, complex yet endearing main characters, and a familiar trope with Kelly's own creative tinkering--going with a falling-for-your-worst-enemy's sibling rather than oft used best friend's angle--that allows it to stand above and beyond the very crowded hockey romance sub-genre, making for an impressive start.

Twenty-nine-year-old Vaughn Vassar was less than thrilled over being traded to the Chicago Slayers. Now, he's got to bide his time and be on his best behavior lest he lose his shot at transferring to the expansion team in Oregon and be with his best friend. It's basically a done deal, but Vaughn refuses to have anything get in the way of it actually happening. Which is why suddenly coming across the girl he spent the night with in Vancouver months ago--the same girl he's never forgotten--hanging out with other Slayers could prove to be a game changer. It turns out that "Allie" is none other than Natalie Baxter, the twenty-seven-year-old younger sister of his main rival--and current teammate and team captain--Greg Baxter (Note: Greg's story can be found in the second Back to You book, Dirty Player). With far too much on the line, Vaughn and Natalie keep their relationship a secret...but at what cost?

The tension! The chemistry! The secrecy! Holy romance reads, this book is, without a doubt, a standout in a year that's already chock-full of fantastic and memorable stories, and the year isn't even over yet. Vaughn and Natalie's relationship is complicated from the get-go, what with Vaughn's enemyship (totally just made that word up) with Natalie's brother, Greg, and then there's the whole thing with his hockey career, but the one thing that's undeniably simple is just how perfect they are together. Vaughn and Natalie, not Vaughn and Greg. Just clarifying. Anyway, nothing comes to mind in terms of my usually nitpicking self in terms of the book as a whole. I loved every single thing about this book, although I may now be a wee bit antsy and anxious for the next Slayers Hook book because the bar's been set seriously high. Fingers crossed it's as fabulous as Dirty Secret, which gets five-plus stars. ♥