Review: If You Say So by Lani Lynn Vale (KPD Motorcycle Patrol #6) 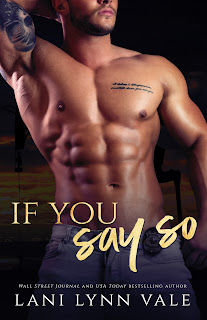 After "meeting" Malachi Gabriel Stokes in the previous KPD Motorcycle Patrol book, Sinners are Winners, as the latest member of the hot motorcycle-riding cop posse of Kilgore, Texas, I couldn't wait to read his story. The very little that was mentioned about his back story--a prisoner of war who was tortured and later rescued and now bears the scars of his ordeal and no memory of who he was prior to waking up in the hospital--and his reaction to the black-haired woman he glimpses at the police station had me very much intrigued. I've read quite a few romances that have one of the main characters suffering from amnesia or some sort of memory loss, and while this book had an interesting take on it, I must admit that I wish there was more lead up to the revelation, but the blurb--particularly the second half--basically eliminates any chance of that because it seems to tell you part of what happens...except it doesn't really turn out that way. Okay, I know it sounds weird and all because I'm not explaining it as well as I'd hoped, but you'll get what I mean when you read the book, which is actually pretty good.

Readers are introduced to former Navy SEAL Malachi Gabriel Stokes in Sinners are Winners, but see, Malachi doesn't feel comfortable with the information that's been given to him about himself. He's lost all his memories and all he sees are the scars on his body and the knowledge that he survived what very few ever have and that his best friend and fellow Navy SEAL, Gabriel Luca Maldonado III, is missing in action. He starts his life anew as part of the Kilgore Police Department's motorcycle patrol, then he crosses paths with Francesca Leandra Solomon. Frankie is Luca's fiancée and Malachi feels a connection with her--with her even bestowing upon him the nickname "Riel" after she notices he doesn't feel as if his own name fits him--a connection that Frankie feels towards her still MIA fiancé's best friend. It's been two years since Luca's gone missing; has the time come for Frankie to move on with someone else, and will she be able to do that with Malachi? Or could the truth simply be waiting to be uncovered?

There were parts of this book that I really liked, and there were parts that didn't click as much as I'd wished they did. Starting with the former, both main characters were easily likable and they did have a connection that I totally got behind. I also liked the idea of the male main character never really feeling any sort of connection to anyone or anything until Frankie enters the police station. Where the book falters, however, is in its blurb, and maybe it sounds like I'm beating a dead horse, but seriously, you go into the book reading about Malachi and the blurb mentions only Luca. So yeah, there's really not much to figure out in terms of who he really is, and that's where the frustration comes in. Plus it mentions that Frankie sees Luca is her nightmare--huh?!--that returns via the ER she works at and that he doesn't want her--huh part two?!--which just made everything MORE confusing. The reason behind the mix-up was plausible, although it is rather strange that his own parents didn't feel anything when they picked him up after he arrives in Kilgore. There's also this murder that pops out of nowhere, and it's like this unnecessary oddity. Throw in the parents and their points of view and how I felt a bit lost with the whole Frankie's father and Luca's sister being married and so on, and this simply ended up a mixed bag. 3.5 stars for If You Say So. ♥

Purchase If You Say So on Amazon | Apple Books | B&N | Kobo.