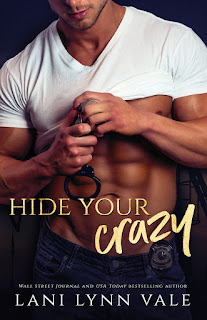 Lani Lynn Vale's got a brand-new series and it's gotten off to one heck of a fun beginning! KPD Motorcycle Patrol is the newest section of the Kilgore Police Department. It also seems to be place where most cops who've screwed up land as a last chance sort of thing. The series starter, Hide Your Crazy, is a mini introduction to the new motorcycle patrol and the people who'll be a part of it, and it happens to focus the spotlight on Logan Gibbs,  thirty-eight years old and formerly of the Army before becoming part of the PD, and Katerina Roberts, in her mid- to late twenties and a medical examiner working in Bear Bottom. They first take notice of each other while at a painting class. Katy's proclamation that she's a weirdo has Logan equally wary and curious while Logan's statement about being a cop has Katy thinking she needs to keep her distance because having a cop for a father is more than enough for her. One ticket, one night of loud pacing, and one sleepwalking episode later, and these two have formed the unlikeliest of connection, but will finding out who her father is, the return of abusive and manipulative exes, and lingering PTSD have either Logan or Katy wanting to get as far away from all the crazy or get even closer?

This was a fun-filled and entertaining beginning to this new series, with Logan and Katy being an interesting twosome. The blurb makes it seem as if Katy is a wee bit lacking in the intelligence department, but other than the whole thing about what color yellow and blue mixed together creates, she's actually rather smart, given everything she achieved as a student AND the fact that she's now a medical examiner. It's also mentioned that she's a virgin (it's never mentioned in the story nor did it seem to be that way) and that she can't find a job (again, she's a medical examiner), so it was definitely surprising the more I got to know her in the story. The humor is strong but there are also some more sentimental moments, especially when it comes to Logan with his best friend, Paydon Maxwell, and Katy with her family. I also loved that these two had dogs and that they absolutely adored them. There were a couple of moments in the story where it felt like bits and pieces were missing--i.e. how they call each other by their first names but never really even introduced themselves. The mystery part of the book isn't as suspenseful as I was hoping for, but still, Hide Your Crazy was a highly enjoyable romance and it receives four stars. A quick note: the blurb mentions Jonah crashing his truck into Piper's car--this does NOT happen. Instead, he chases after his cat and she swerves into a ditch while trying to avoid them, which is how they meet a second time. ♥