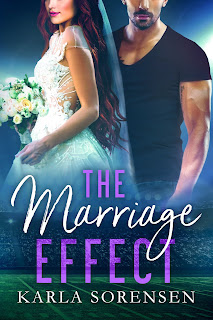 Fake marriage romances aren't exactly my favorite trope, but when an author does it right, even someone like me can't resist falling for it. In The Marriage Effect, Karla Sorensen adds her own unique touches to this third novel in her Washington Wolves series, and it definitely does trick. This is the story of football player Logan Ward and former fashion model Paige McKinney. At thirty-six, Logan's been there and done that when it comes to the perks of being a star athlete, and while finding a woman to spend time with has never been a problem, he simply doesn't have time nor the inclination for it anymore. He's got his four younger sisters to keep his eye on, what with being their legal guardian and all and he takes his role seriously. But when one of them ends up in the hospital, it becomes the perfect opportunity for his brother Nick to stake his claim on them. His lawyer tells him that the only way for him to retain guardianship is for him to settle down, so when a twenty-eight-year-old ex-supermodel announces she's his fiancée, it should've been the simplest solution, but things are about to get very complicated.

I really liked the chemistry that Paige and Logan had going in their story because it allowed me to see them as an actual couple that could very well be perfect for each other. I'd like to note that the agreement they came to be regarding getting married was one that was mutually beneficial. He needed it to secure his role as his half-sisters's legal guardian while she needed it because it was a stipulation attached to receiving an inheritance from her late aunt. All that being said, these two sizzled during their more intimate moments and certainly kept the other on their toes outside of the bedroom. Then we've got Logan's sisters themselves--twins Lia and Claire, Isabel, and Molly--who were fabulously entertaining every single time they were around. I loved how devoted Logan was to them and how, over time, the same could be said of Paige. There were a whole lot of laughs throughout the book, and it was the ideal breather after reading much heavier romance fare that had more angst and drama in them. While The Marriage Effect is a standalone, I recommend you read the first two books as well. It receives five stars. ♥

Read my reviews for the Washington Wolves series:

The Bombshell Effect (book one) - five stars - My Review

Purchase The Marriage Effect on Amazon.