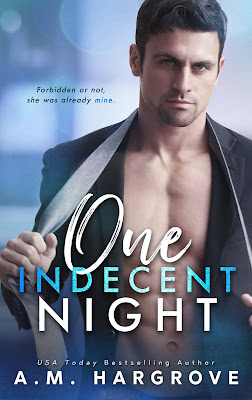 About One Indecent Night
The day I saw Sylvie West standing next to the bride, something moved in me I was certain had died.

I’d known her since she was a pain-in-the-rear kid, but she was my best friend’s cousin, and off limits.

He also told me he’d strangle me if I ever laid a hand on her.

When she downed tequila like water at the reception, and then danced on the table, all bets were off.

She was my kind of woman, and forbidden or not, I was going to make her mine.

Only when morning broke, I woke up to a different Sylvie—one who didn’t remember a single thing about the passion-filled night we’d shared.

Now, I had to prove I was the one who was meant for her.

After she put up one obstacle after another, the time had come to pull every trick out of my hat.

And Sylvie had no idea I was one tricky bastard.

But the last thing I expected was for her to turn the tables and play the last trick on me. 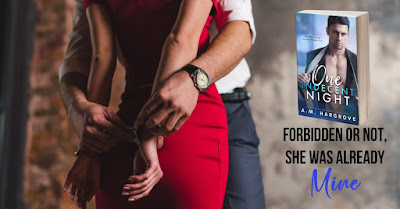 Read my four-starred review of One Indecent Night.

Add One Indecent Night on Goodreads. 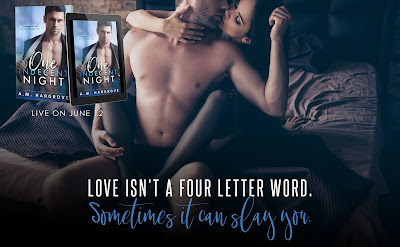 An Excerpt from One Indecent Night
I was dabbing at my coffee stain when a knock sounded on the door. “Come on in, Grey.”

The door opened, and he walked in. “It’s not Grey.”

My head jerked up to see Evan standing there. “What are you doing here?”

“Sorry for the subterfuge, but I had to find a way to see you. You’re quite stubborn, you know.”

He shrugged. “With permission.”
I gawked at him. “What does that mean?”

“It means I spoke to Grey first. He said it was okay.”

“Oh, my God. You’re both conspiring against me.”

“Sweets, I only wanted to return something of yours and you gave me such a hard time of it, this was the only way I knew how.”

“What are you talking about?”

He reached into his pocket and pulled out a thong. Then the bastard dangled it in front of me. “Recognize this?”

Shit. It was mine. I went to snatch it, but he pulled it out of my reach. “Oh, no. It won’t be that easy. In order to get it back, you have to go to dinner with me.”

He really couldn’t do anything.

“See, you get my point. We can go anywhere you’d like, as long as it’s a sit down dinner where they have a great wine list.”

Then the asshole put it up to his nose and inhaled. “Ahh, my favorite scent.” 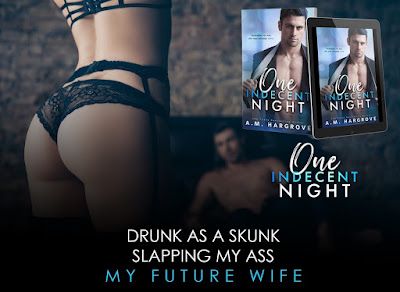