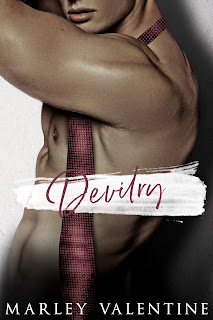 Holding onto his wrists, I get lost in his eyes, imagining all the possibilities, while my mouth speaks the brutal truth. “I know this is going to end.”

His eyes fall closed, like the words are just too much. It's heart-wrenching and twisted that I want the truth to be as hard for him as it is for me. “I don't know how or why or when. I just don't want to waste time with anything else but you and me.” I lean into him and plant a surprise, soft kiss on his lips. “The important stuff.”


Devilry isn't only the second novel in the multi-authored King University series, but it also happens to be my first-ever read from Marley Valentine--and it won't be my last! Color me impressed because this was taking a highly popular trope--the teacher-student romance--and putting a fresh spin to it while making sure that the actual writing was top-notch. Maybe it's the editor in me meshed in with the reader side that has me constantly craving a fine balance of style and substance, and while I try not to be overly nitpicky about it, I certainly won't hesitate to laud the efforts of authors who have struck exactly that, so hats off to this formerly new-to-me author for coming up with a love story that had ticked off everything on my check list as well as all that extra stuff I secretly hope for.

Cole Huxley and Elijah Williams are both new to King University, but their first meeting isn't on campus; instead it's along a running trail where they literally crash into each other. The spark of attraction on both sides temporarily overrides the aches and pains on Eli's end, but he runs off and neither expect to see the other again. Only they do, and this time around, it's in a classroom, but Cole and Eli aren't classmates. Eighteen-year-old freshman Eli who is on a scholarship to the college of his dreams is a student, and thirty-one-year-old Cole is none other than his professor. The smartest thing they could do is keep their distance from each other, but when the temptation becomes too great, these two stop resisting. There are risks to being together, but could it be worth it in the end?

Be still my heart! I absolutely loved this book! It's a taboo romance that feels real, with the potential for heartache extremely high and the probability of sacrifices constantly on the table. Eli is a young man who never had acceptance from the two people who should have given it to him first, and I felt privileged seeing him come into his own and gain even more confidence as he welcomed more people into his life--from Cole to his new best friends, Aiden and Callie. Speaking of Cole, could there have been a better man for Eli to be with? He isn't perfect, but he's perfect for Eli. And then there's the awesome supporting characters, some of whom I REALLY hope will get their stories told in the future, particularly, Aiden and Alex. For now, I shall relish all things Devilry. Five-plus stars! ♥