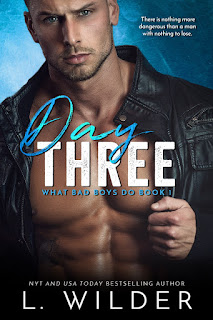 Day Three is the first book in L. Wilder's new romantic suspense series entitled What Bad Boys Do, and it's basically the story of a hit man who falls for his target. We have Jasper Nichols, a hit man who follows a set plan for each hit he makes: he receives the information on the target on the first day, acquires the targets location on the second day, plans the kill on the third day, and and accomplishes the hit on the fourth and final day. He's never had any issues before. He's focused and professional, which is why he's as in demand as he is. His latest assignment, however, presents one hell of a complication: the target herself. Madison Brooks is twenty-four and is nothing like any of the other targets that he's been given before. There was an innocence to her that made Jasper wonder why anyone wants her dead. As day three of his assignment arrives, it becomes very clear it won't be like all the others.

Surprisingly, this book isn't as dark as I expected it to be, and definitely not even as mildly dark as most of the author's previous releases. The idea of a hit man following for the person that they've been tasked to take out usually brings with it a whole lot of back and forth in their head, but there wasn't too much waffling for Jasper. His feelings for Madison were strong, and these two were really sweet together. The suspense is still there, as was, of course, the romance, but this was heavier on the latter than the former, not that there's anything necessarily wrong with that. While this wasn't as dark as I thought it would be, I did enjoy the connection that Jasper and Madison shared, and Jasper's younger brothers, Grady and Levi, were rather entertaining. Four stars for Day Three. ♥