Review: A Hundred Ways to Love by Ellie Wade 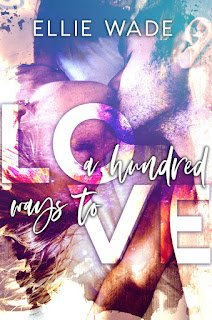 I can't believe it's been more than two and a half years since I last read something by Ellie Wade! My first three reads from her were part of her Flawed Hearts series, and all of which left me very much impressed by her writing. So, I was excited to have the opportunity to read and review her latest release, a standalone about a young woman trying to figure out where her life will lead her next but not expecting to find answers in the last place she ever thought she'd return to. Think of this as a book about second chances, but not only when it comes to love but when it comes rekindling friendships and family ties that were not absolutely severed but left frayed and dangling.

A Hundred Ways to Love is about Eleanora Turner, who at twenty-three finds herself heading back to her grandmother's place in Texas. While she thought of Mimi's as home more than she did where she used to live with her parents, once she left her home state to study in New York, Leni never thought she'd return, especially not without any prospects and feeling like a failure. She also doesn't expect for the first face that she sees to be that of her former best friend, William Moore. She made it clear to him years ago that they could no longer be friends, but now twenty-four, Liam refuses to abandon Leni, not when it's obvious that she needs more people in her corner. Leni has worked hard at shielding herself from heartbreak and rejection, but Liam hopes to break down her walls.

It took quite a few chapters for me to soften up to Leni, whom I was not a fan of, what with the way she treated not just Liam but even Mimi and those who tried to get close to her. As her heart opened itself up to the possibilities that she had not even allowed herself to consider before, Leni did prove to be a heroine worth liking. She redeemed herself quite nicely as she found her footing back in Texas. As for Liam, the guy was a winner from the get-go, and that wasn't limited to how patient and understanding he was when it came to Leni. He was exactly what she needed in her life, but I appreciated that their reunion as friends took a bit of time because it made their later transition into a more romantic relationship more rewarding. Ellie Wade did not disappoint with A Hundred Ways and in the short span of time it took for me to read this, I was reminded of why I love her writing. 4.5 stars. ♥