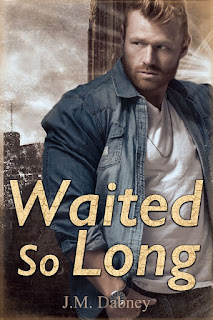 Waited So Long is a new standalone book from J.M. Dabney, and it's an M/M romance with elements of a May-December relationship and a Daddy-boy kink with a twist. Devon Hoffman has been in one committed relationship for nearly three decades, two of which were spent as a married couple, but when his husband files for divorce, Devon's at a loss as to how to start over again at forty-seven. The fact that he's been hiding his years-long desire to have a Daddy to discipline and love him is another reason he doubts he'll find someone he can be with. What Devon doesn't know, however, is that someone's been waiting for thirteen years to lay his claim on him, and that someone is none other than Bernard, his best friend's much twenty-eight-year-old son. Bern respected the fact that the man he loved was married, but when news of the divorce reaches him, Bern's ready to leave the military and make his way back home. Bern knows Devon isn't ready, but the Daddy he craves is coming his way very soon.

This was a pretty good read, one that had a younger Daddy and an older boy and the perceived complication of Devon being best friends with Murray, Bern's dad. To be honest, there aren't a whole lot of complications in this story. You'd think there were going in, but as the story plays out, the only real thing that holds Devon back are the insecurities that have been instilled in his head by his ex-husband. Bern going from Murray's son to Devon's Daddy felt a tad abrupt, even though he said he wanted to ease Devon into the whole thing, but yeah, his words belied his actions to a degree. There was a sweetness to their story, given how devoted Bern was to Devon, even prior to his admitting his feelings to the older man. My favorite thing about the book, however, were the glimpses into the love story that Murray shared with Bern's late mother, and how loving and loyal Murray remained even after twenty years of her being gone. All in all, Waited So Long was entertaining and a pretty quick read. It gets 3.5 stars. ♥