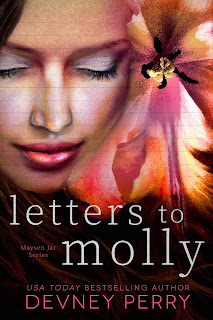 I leaned into his side and rested my head on his shoulder. “I'm sorry, Finn.”

It felt good to say those words. To let them float into the wind and fade with the sunshine.

It felt good to say those words.


My first ever Devney Perry read was The Birthday List back in April of last year, and I realized two things after I was done reading what ended up being one of my top reads for 2018: first, I had clearly been missing out having not read the author's prior releases, and second, I refused to miss out on anything and everything she was going to be publishing going forward. I happily devoured the four books that make up her Lark Cove series over the past several months, and I'll be catching up on her Jamison Valley series in time for the release of the final book in August. When Perry announced, however, that she was going to publish a companion novel to The Birthday List--with both books now making up her Maysen Jar series--I was equal parts excited and anxious, the former because I've been curious about Finn and Molly Alcott's story since I came across them as supporting characters in The Birthday List and the latter because of the bar that was set by the aforementioned book and how my expectations were now exceedingly high for this follow-up story. Well, the author met the challenge and blew it to smithereens.

Fifteen years ago, Finn Alcott met his younger sister's boyfriend who would later become her husband. That same night, he also met her roommate and best friend, Molly Todd, who would go on to become his wife. They were madly in love and shared their dreams of family and a landscaping business, but life slowly but surely became overwhelming for Molly and Finn. When the pressure became too overwhelming, with words and actions that couldn't be taken back, the only option they had before them was to file for divorce, and for the past six years, they've tried their best to co-parent their two children, Kali and Max. They've come a long way since their divorce, and since Finn has had relationships since then, maybe it's time for Molly to try dating again at thirty-five. But out of the blue, something had her hesitating--that something was in her mailbox and it was a fifteen-year-old letter from the man that made her believe in happily-ever-afters and that they were meant to be together forever. It becomes the first of several--some evoke happy memories, others not so much, but all are penned by the same man. However, the sender of the once-secret letters isn't the writer. Who could it be and what are their intentions?

There's something unique about second-chance romances. The main characters were already involved with each other once upon a time, and they didn't get their happy ending, so what could have changed the second time around that will have them traveling down a path with a different outcome? I'm a pessimistic romantic, which may seem like an oxymoron of sorts, but I try to think of it as me keeping my expectations in check when it comes to love stories, especially real-life ones. In this novel, Finn and Molly had the love, the home, the family, and even the business, and still they ended up getting divorced. The proverbial straw that broke the camel's back was made clear early on, but as the story continued, it was clear that there were other factors involved and that their marriage falling apart was a long time coming. So, how do they get back together and do they even want to? I'm not one of those people who believes a couple should stay married or reconcile simply for the sake of the children. My own parents separated when I was very young, and while I may have harbored hope years ago that they'd get back together, in hindsight over these decades, cutting ties as spouses was what was best for everyone concerned.

Molly and Finn's story isn't the first one wherein the couple was previously married, but the author's take on the whole "divorce romance" trope was fresh and bold. Devney Perry had no qualms putting before her readers the good, the bad, and the ugly of Molly and Finn's history as a couple, and I more than appreciated that because two people who go their separate ways is, more often than not, heartbreaking and Perry's honest take on it reflected that. We get glimpses of how much they loved each other, but no more than necessary, another direction that Perry decided on that I found refreshingly creative. We don't need the whole falling in love part rehashed too deeply nor is it something that's needed after the divorce because the love is subtly revealed to still be very much there. What's highlighted on is the story of forgiveness and reflection, both of self and the other person. My heart broke for these two and the revelation of how it all ties in with the heartrending tale that unfolds in The Birthday List stole my breath and had me reaching for tissues. I never had a doubt that Devney Perry could write a hauntingly beautiful love story, yet she still took me by surprise with the heartfelt honest found on the pages of Letters to Molly, which I'm giving five-plus stars to, even though that doesn't seem enough. While you can read this as a standalone, I seriously encourage you to first peruse The Birthday List, which is the story of Finn's sister, Poppy. ♥

Read my reviews for the Maysen Jar series:

The Birthday List (book one) - five-plus stars - My Review