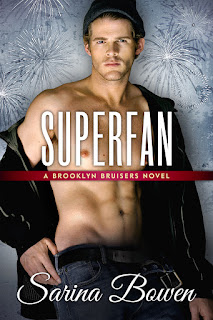 I've been itching to read Silas Kelly's, back-up goalie for the Brooklyn Bruisers, story since it was made clear in Overnight Sensation that there was more to his fanboy ways than meets the eye. Singer and songwriter Delilah Spark has a fan following, but she certainly never thought one of those fans would question on social media her taste in hockey teams. She definitely never considered that fan to be none other than Silas Kelly, a professional hockey player for the highly popular and successful Brooklyn Bruisers. Even more, Delilah had no clue that Silas is Ralph, the gorgeous bartender she met three years ago at Roadie Joe's in Darlington Beach, California. Their paths may have crossed but then went in their respective directions soon after, leaving them with memories and wondering "what if" for years. But all it takes is a few tweets and helpful friends who have their backs for the hockey playing superfan and the singing superstar to find their way back to each other. Everything seems so promising, but with her career in limbo, his career taking him from city to city, and a spiteful ex on her end, will Delilah and Silas ever move past the limitations to fully embrace that what they have could truly be sky's the limit?

Every person looking for a happily-ever-after in their lives should have a Silas Kelly to be their partner. Goodness, but how this guy was willing to go above and beyond for the one girl he's never forgotten about. The fact that what they shared three years ago wasn't what you'd expect it to be, and there you have proof that when you share a connection, it doesn't necessarily have to be sexual for it to be notable. While I loved Silas, I really liked Delilah, although I think that because of everything that was weighing on her and how she seemed to get pulled in one direction and not always push back had me didn't lead me to the same level of adoration I had for Silas. Now, when it comes to the supporting cast, well, the usual suspects from the Bruisers are present and as always, they showcase just how much of a family they are as compared to being "just" a team. On Delilah's end, can I just say that her publicist, Becky, was fabulous and is a favorite of mine. From characters to the story, there was not a thing I didn't like about this sixth full-length installment (not counting the crossover novel that is Bountiful) in Sarina Bowen's Brooklyn Bruisers series. She absolutely knows her way around hockey romance! Five stars go to Superfan. ♥