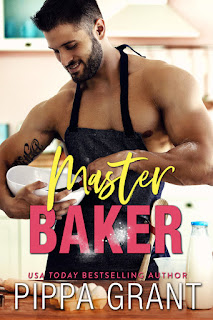 Master Baker is the newest standalone novel from bestselling author Pippa Grant, although it feels like a companion novel of sorts to the Bro Code series (which I absolutely adore!) where Grady Rock was introduced and to The Pilot and the Puck-Up and Beauty and the Beefcake, both of which belong to Grant's Mister McHottie book world and neither of which I've read (but are now on my to-be-read list!). This does work well as a standalone, so feel free to go ahead and read it, regardless of whether you're familiar with the author's writing or are new to her.

Grady Rock is good with his hands and has a way with words, and he uses both to his advantage, which is why he's quite masterful when it comes to getting a rise out of...dough. And well, baking in general. Crow's Nest is the go-to bakery in Shipwreck and the surrounding counties, leaving its competitors in the (flour) dust. Just like Duh-Nuts over at Sarcasm. The same Duh-Nuts which has been passing fliers around announcing its re-opening. The same Duh-Nuts now owned by Annika Williams. The same Annika Williams who was once Grady's best friend...and the girl he loved. But she went of to join the Army and life went on; now, she's back, she's become enemy number one.

Annika and Grady were best friends who became bitter rivals but were so much better as lovers and more. As usual, Pippa Grant is a master at cooking up the sort of chemistry between her main characters that is palpable and believable. These two were in love with each other for years but nothing came of those feelings, but then that's what happens when there isn't a whole lot of communicating going on. They were really stubborn, yet it was clear that their far less hostile feelings for one another were just beneath the surface, itching to be explored. Coming from two rival towns and with now rival bakeries, these two seemed to have insurmountable odds against them, but oh boy, seeing them overcome it all turned out to be a scrumptious treat! Five stars go to Master Baker. ♥