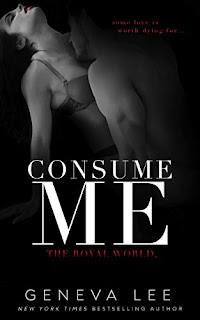 Consume Me is the third novel in the Royal World series, and suffice it to say that this story absolutely consumed me! Geneva Lee left us with two major cliffhangers in the first two books, and after everything that happened in the second one, I definitely needed a whole lot of answers and resolutions. Just a quick reminder for those of you who have yet to read this particular series: the novels MUST be read in order because they have a continuing story line. I may also inadvertently mention something in this review that could be considered spoilery because they're things that happened in Cross Me and Claim Me, books one and two respectively. Consider yourself forewarned!

Clara has been taken, and Alexander will not rest until he gets his Queen back. The audacity it's taken for the King's consort to be abducted raises red flags, and X knows that he needs to find out who's behind everything that's been happening in order if he ever hopes to have Clara back. He wishes nothing more than to trade places with Clara, for him to have to endure whatever it is she may be going through. He guarantees that whoever's taken his wife will wish that they'd thought better of it because he will stop at nothing to have the only woman he loves return.

I'm trying REALLY hard not to spill the proverbial beans here because, like I say again and again, not everyone appreciates details being mentioned in a review that come off as spoilers. I love that things between X and Clara were resolved. I appreciated that X had the sort of character development that felt like it was a long time coming, and that Clara came to certain realizations, as is usually the case when your life flashes before you. I do, however, feel like that there are a number of things that aren't fully resolved. I can't really go into them here, but if you've read the book, you may have an idea of what I'm talking about. I'm also wondering whose story could be up next in the series, and if it's who I'm hoping it'll be, then I'll be a really happy camper. I'm giving Consume Me four stars. ♥

Read my reviews for the Royal World series:

Cross Me (book one) - five stars - My Review

Consume Me (book three) - four stars - My Review (posted above)