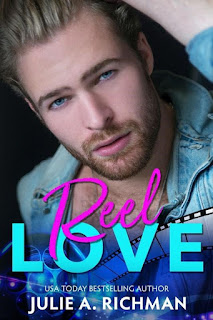 There's always that extra bit of something in Julie A. Richman's novels that make me want to block out whatever else is going on around me so that my sole focus can be just on whichever book of hers I'm reading. With her newest release, Richman introduces readers to an author named Francesca Simonelli whose bestselling novel is being adapted for the big screen. Going through potential actors to be added to the cast, Frankie comes across the headshot of Finn Parker, and the blonde, blue-eyed guy is how she's always envisioned the hero of her story. The studio has their sights on a more well-known name--Maverick Dailey--who has more than proven how much of a box office draw he is. Maverick wants the role as much as the studio wants to give it to him, and while Frankie acknowledges that he could be good as the lead actor, her gut tells her that Finn would simply be...perfect. The fact that Frankie's and Finn's paths seem to intersect time and time again and that they share a connection should be a great bonus, but who is Frankie falling for: the real Finn or the idea of Finn portraying her beloved book hero?

I know that this book's been called an ideal summer read by some of my fellow bloggers out there, but allow me to take it one step further by saying that Frankie and Finn's love story works wonderfully well during any season, but then that's par for the course when it comes to this author's work. I adored every single about this book, and Frankie and Finn were the sort of main characters that you could truly root for. I liked the beginning of the story, which is where we have Frankie all but drooling over Finn's headshot, but what truly hooked me was the fact that Finn wasn't all that thrilled about Frankie's book, which he was reading in preparing for his audition. The idea that Frankie was nearly smitten with Finn's photo and then here Finn was not exactly fawning over this romance novel that women loved but that he found...lacking. From then on, there was simply no turning away from this book, and I enjoyed the heck out of it! And the whole playing out of the story of Griff and Gabriella, aka Frankie's fictional MCs, plus the irresistible Maverick (I SERIOUSLY need him to have an HEA!)? Gah! Loved it! Five stars for Reel Love! ♥