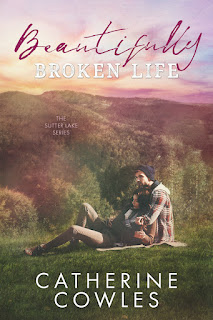 Beautifully Broken Pieces may have introduced me to Catherine Cowles's writing, but it's Beautifully Broken Life that's made me a fan. The second novel in her Sutter Lake series, this was a beautifully penned story about love, trust, and respect both that we rediscover for ourselves and that we give to others. Tessa moved to Sutter Lake, Oregon two years ago, and while it became a safe haven for her, the wariness she carries with her has never fully waned. She's poised to run if needed, which could be why she has never made it a true home for herself. Those who are familiar with her have noticed her aversion to being in close proximity to men, hinting at the past that she's yet to share with anyone. And then Liam Fairchild came to town, choosing to stay for an extended period of time to get away from the pressure and trappings of his music career back in Los Angeles, California. He finds an unexpected muse in the woman who doesn't seem to be as fascinated with him as he is with her, but while Liam may have a stalker back in LA, Tessa is running from something more sinister...and may be closer than she thinks.

I came THIS close to giving this book a five-starred rating, but my two reasons for hesitating were that any major twists were ones you could see coming and that Tessa never had a last name. Yes, she had one with her real name--although I'm totally just assuming that she shares the same surname as her late mother--but then she goes through the whole story simply known as Tessa. I'd think that because she was working for Jensen Cole, having a last name was necessary for employment records and such, but yeah, no last name, which is, well, a pet peeve of mine and one that I allow to slide on extremely rare occasions. Now, those two things aside, I did love Tessa's story of going from surviving her circumstances to somewhat flourishing past them, creating a life for herself, one that evolved into more once she opened herself up to Liam and the townsfolk of Sutter Lake and to all the possibilities life still had for her. As for Liam, he was a pretty well-rounded main character, although I do wish he was more layered than he was. Still, Beautifully Broken Life surpassed expectations, leaving me satisfied enough at 4.5 stars. ♥