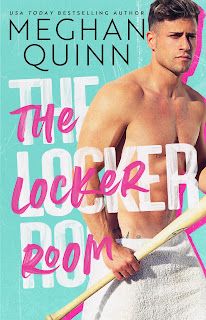 The Locker Room is the newest novel from bestselling author Meghan Quinn and it's got one of my favorite book boyfriends this year! When Knox Gentry first met Emory Ealson, they were both drunk as skunks and fell asleep with her runaway boob resting comfortably in his hand. The next time their paths cross, it was all thanks to Emory's flyaway (get it?) map that smacks Knox in the face. She's not like any of the other girls he's met. If anything, Emory doesn't seem to be all that interested in Knox as anything more than a friend. He's definitely smitten and it looks like he's falling for her, and while the legend of the locker room is one that's never really interested him the past, maybe it's high time he find out just how real the legend is. They say that if you take a girl to the baseball locker room for some after-game time (spoiler alert: SEX), she ends up becoming your wife. Knox has never taken a girl to the locker room; now, he's tempted to invite Emory, but what'll it take for her to say yes?

Meghan Quinn has a knack for writing the sort of romantic comedies that end up with me snort laughing at least a few times. She also happens to have a gift for coming up with some of the most unforgettable male main characters I've ever come across in a rom-com, and that now includes Knox Gentry. Goodness, but how this guy hit a home run with my heart (pun obviously intended!). He was sweet and sexy but so sincere as well. On the other hand, Emory was a good female main character, and as much as I liked her, I was as in love with her as much as I was with Knox. There was also something that she did in the story--not telling what though!--that I so was NOT a fan of. I don't like it when male characters do it, and the same goes for when female characters do it. It may seem selfless, but ugh! Other than that, I did love everything else about the book, so much so that I hope this is just the first in a new series from Quinn. Hey, it's not my fault she made certain supporting characters interesting enough for me to want to know more about them! So, allow me to give The Locker Room four stars (get reading!) while crossing my fingers for more from this sports romance world that Meghan Quinn has me all curious and giddy over. ♥

Purchase The Locker Room on Amazon.