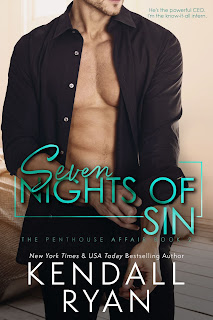 Seven Nights of Sin is the conclusion to the Penthouse Affair duet from bestselling author Kendall Ryan. This picks immediately after the events in the first book, The Two-Week Arrangement, and finds Dominic Aspen heading out to meet the very same woman he believes betrayed him: Presley Harper. She trusted the wrong person, and now, she's forced to deal with the consequences. Dominic has made it clear that whatever it was they had shared for two weeks no longer exists. That doesn't mean, however, that she's lost her internship. There's no denying that Presley is the cream of the crop among all the interns at Aspen Hotels, and Dominic knows how much of an asset she was when it came to deal he's been hoping to make with Roger Harwood. Inasmuch as Presley is happy she still has her internship, she knows she's going to have to prove she's worthy of a job and of Dominic's trust again.

This was every bit what I expected it to be, wrapping things up rather nicely for Presley and Dominic. I absolutely understood why Dominic felt the need to treat Presley the way he did after everything that happened in book one. Was he cold? Yes. Do I think he was outright cruel towards her? Not really, although he did seem to go overboard with the whole back and forth thing, which made me want to shake him and tell him to make up his mind and to advise her to walk away rather than be tormented by his behavior. I liked the pacing of the story and how Kendall Ryan made sure to show the compassionate and playful sides as well as their passionate and professional ones. I was happy with how everything played out and felt the ending to be...adorable. Seven Nights of Sin gets 4.5 stars. ♥

Read my reviews for the Penthouse Affair series: