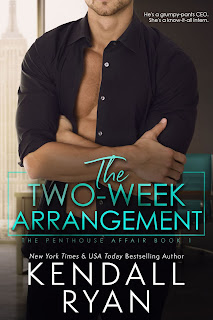 Kendall Ryan's new duet, The Penthouse Affair, starts off with The Two-Week Arrangement and introduces readers to recent college graduate Presley Harper and billionaire hotelier Dominic Aspen. Presley's twenty-two and in desperate need of the internship with Aspen Hotels while also supporting her younger brother, Michael; Dominic is twenty-six and is trying to balance being a single father to his twin daughters, Lacey and Emilia, while being at the helm of the family-owned hotel business. For the next two weeks, Presley will be under the mentorship of Dominic and she needs to impress him in order to ensure herself a job with Aspen Hotels. She thought she knew what to expect with the job, but when Dominic adds one particular task, she knows it's an offer she can't really refuse. He needs Presley to step into the role of being his "plus one", and it's a role he knows is pivotal in a business deal. After all, image is everything, and Dominic needs to have Presley by his side in order to add some shine to his. Two weeks isn't too long of a time for their simple arrangement, but it's enough time for things to get very complicated.

This was a really great beginning to what already feels like an enticing duet. I liked the dynamic between Dominic and Presley and how there was a confidence to her when she interacted with Dominic, refusing to kowtow to him simply because he happened to have more money than she did. They had a strong connection from the get-go, and I loved that thrum of tension that was building between the two of them the more time they were in each other's company. Now, I knew going into this that this was just the first book in a duet, so I was pretty sure that it was going to end in a cliffhanger, but the direction the story took in the last few chapters had me in shock, and that ending has me now eagerly awaiting the release of the second book, Seven Nights of Sin, which is supposed to be out in three weeks' time. Fingers crossed it's as good as, if not better than, The Two-Week Arrangement. 4.5 stars! ♥