Review: On the Rocks by Kandi Steiner (Becker Brothers #1) 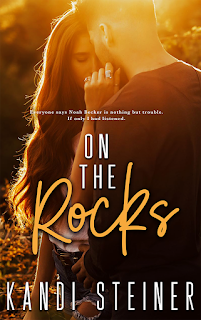 One of my favorite authors has a new book out and it's got a small town romance feel to it! On the Rocks, which is the first in a series of standalones about the four Becker brothers from Stratford, Tennessee. Book one is about the second to the oldest in the brood, twenty-eight-year-old Noah Becker, and he's paired off with nineteen-year-old Ruby Grace Barnett. Everyone in town knows who the Beckers and Barnetts are, the former having helped with making Scooter Whiskey Distillery the household name it is today yet suffering through disappointment and tragedy along the way, and the latter being in politics and high society. Once upon a time, Ruby Grace was the precocious nine-year-old girl who used to kick the back of the church pew Noah sat in; now, she's the poised daughter of the town mayor who's engaged to be married in six weeks' time. She looks poised and every bit the young woman her parents expect her to be, but Noah glimpses a different Ruby Grace--one who has dreams and still has every bit of that carefree and fiery personality she once had. Ruby Grace has been warned away from Noah, telling her that he's nothing but trouble--and they could well be right, so why can't she seem to stay away?

This book had almost all of the elements that I look for in a small-town romance, and while I wouldn't consider it my favorite from Kandi Steiner, it was still a highly enjoyable read as far as I was concerned. If I had to pinpoint my absolute favorite aspect of the book, it would have to be Noah and his family. I loved noting the differences between the four Becker brothers--Jordan (thirty-two), Noah (twenty-eight), Logan (twenty-six), and Michael (seventeen)--and relishing how close they were to each other and their mom and how they continued to honor their late father. Another thing I liked was that Ruby was every bit the nineteen-year-old that she was--sometimes mature, sometimes not so much--and that was absolutely alright because it's that period in your life where you're still trying to figure out who you are as an adult. The connection Noah and Ruby shared was there from the get-go, but it was a connection that was more of an inkling that grew the more time they spent together. The family issues and doubts Ruby had with regards to her upcoming marriage weren't too surprising, which is probably why this book didn't stand out as much as I hoped it would. Overall, On the Rocks was a mostly satisfying 4.5-starred read. ♥

Purchase On the Rocks on Amazon.