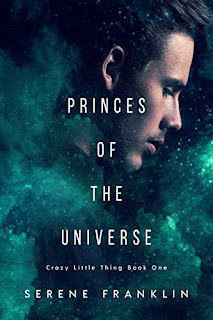 Ah, I do love me a well-written slow-burn romance, and that's exactly what I got with Serene Franklin's Princes of the Universe, the first in her new Crazy Little Thing series. Ten years ago, an eighteen-year-old Elijah Harper had lost his beloved mother and did what he had to in order to have enough money to take care of himself and provide the care an abandoned puppy he's picked up from the streets needs. What happened back then only happened once and it was with a twenty-year-old guy named Rhett Ryder. He's kept it a secret for a decade, going on to now have a job he enjoys with an advertising firm. When he's brought in to be part of the team for a potential new client whose family is known for their wealth, Eli looks forward to the opportunity. Then he comes face to face with Bryan Rettger, a pastry chef planning to open his own place--and the guy Eli knows as none other than Rhett Ryder.

I've had a thing for this author's writing since I read her debut release last year, and her follow-up to that earlier this year reinforced the promise she showed. I love that she's kicking off a new series because that means we'll be getting more from this cast of characters that she's assembled, or at least that's what I'm hoping for. If the rest of the series is as good as this first book, then I'll be a happy camper because I seriously liked the story that Serene Franklin had weaved together and she's got main characters that charmed the heck out of me. Eli and Bryan had a slow-burn romance, and I appreciated the pacing because while they may have met ten years ago, their memories of that event are very different, what with Eli considering what he did as an act of desperation and Bry having never forgotten the young man that he shared a connection with before. See, this is why I love dual perspectives!

I loved getting to know Eli and Bryan and watching their relationship grow and evolve from two near strangers to that of point person and client and then the closest of friends. I'm not saying that I hate insta-love stories, but there's just something about love stories that allow readers to get to know the characters they're reading about at the same time that the characters themselves do. In my case, I become more attached to them and more invested in the outcome of their tale. There's a fair amount of angst here but nothing I would consider overboard, and there are supporting characters that I feel helped further enrich Eli and Bryan and move their story forward. If ever there was one who had the potential to be a scene stealer, it would have had to be Prince. Throw in some major Star Wars love (geek alert!), and there wasn't a whole lot I could have asked for. Princes of the Universe snags 4.5 stars. ♥

Purchase Princes of the Universe on Amazon.