Review: What We Do in the Night by Stylo Fantôme (Day to Night #1) 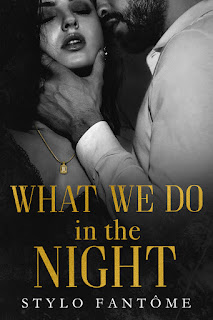 What We Do in the Night is the first novel in the brand-new duet from the always awesome (knock on wood since I don't want to jinx it) Stylo Fantôme. We have Valentine O'Dell, a young woman who has been working at a special club called Caché. It's a place where you can dance to your heart's delight, but it's also a venue for fantasies to come to life--to bring forth even the darkest desires of one's soul. When Ari Sharapov arrives at Caché, he spots Valentine and realizes that she could serve the very purpose he's been craving for. Ari needs to regain the control that he feels he doesn't have while working at his father's law firm. He sees Valentine as someone needing to be cared for--to be controlled. Their arrangement is simple: what happens between them only happens at night. They aren't in a committed relationship and there are no feelings involved. Ari pays for Valentine's time--and that's all this is, after all: a transaction founded on the most basic of attractions. And then everything becomes complicated.

You know how there are those characters that you just love to hate? Well, that's basically Ari Sharapov in a nutshell. The guy is, well, an asshat, and he treats Valentine like nothing more than something he's paid for, to do with as he pleases. There have been times where I may have wondered what it would be like if a main character in a book I'm reading were an actual living, breathing person because I'd like to get to know them. In the case of Ari, I'm just glad I don't know of anyone who's as much of a jerk as he is. I suspect, however, that we'll be seeing a more palatable side to him in the second book (but hey, I could be wrong!). My favorite thing about this book was Valentine O'Dell. She was so not a pushover and she had a good head on shoulders. She had a fire within her that refused to be put out; good for her! Now, I don't know how the rest of the non-relationship between these two is going to play out in book two, but I'm certainly looking forward to find out. 4.5 stars for What We Do in the Night. ♥

Purchase What We Do in the Night on Amazon.