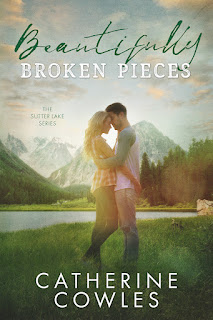 Beautifully Broken Pieces is the first novel in the Sutter Lake series from Catherine Cowles, and it also happens to be my first-ever read from her. I'd heard good things about Cowles's writing in general and this series starter in particular, so when the opportunity to read and review this prior to the release of the second book in the series came along, I considered myself quite fortunate. Now, I had no clue that this was a spin-off of the author's debut release, Further to Fall, which I have yet to read. The main characters from there do appear here, but this book works well enough as a standalone, although I've already added the other book to my never-ending to-be-read list.

Taylor Lawson's move to Sutter Lake, Oregon was one of both desire and necessity after the passing of her mother. This was to be a fresh start for her, even if it's only meant to be for a year. Twelve months of solitude would bring her the peace of mind she desperately needs. The home she rents is located on property owned by the Cole family, and they're more than welcoming, but she still maintains her distance, more so with the town's deputy sheriff, Walker Cole. Like Taylor, Walker knows what devastating loss feels like, but after ten years, she's the first woman who stirs within him feelings he never thought would come to life again. Neither one of them was prepared for their lives to change once they were in each other's orbit, and neither of them is aware of danger lurking nearby...

Catherine Cowles, without a doubt, has a way with words. She writes beautifully, and I get why she has as many positive reviews as she does. I liked how this was a story about living and loving and moving forward, embracing the fresh opportunities that are thrown our way and realizing that human connection is a necessity. I liked Walker and his family, and his story about loss was a heartrending one. Now, Taylor was way more difficult for me to connect with and a lot of that had to do with her being standoffish. She had this aura that came off as one I wasn't all that interested in absorbing, but that's a pretty difficult thing to do when she happens to be the other main character in the story. So yeah, I persevered and she did turn out to be not as...unlikable...as I felt for more than half the book. The suspense element was pretty good as well, so Beautifully Broken Pieces was a four-starred read. ♥