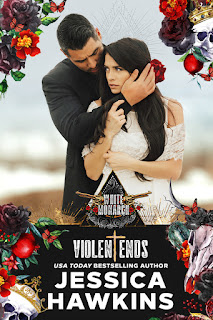 That...that was...EVIL! That cliffhanger of an ending has me wanting to scream in frustration because GAH! I knew Violent Ends was going to end in a cliffy. After all, it's only the second book in the White Monarch trilogy and had this ended in a non-cliffy way, I would have been shocked to say the least. But knowing a cliffhanger was coming did not prepare me for the actual cliffhanger Jessica Hawkins chose to go with. I need my resolution and I need it now, but alas, I need to wait for the release of book three, and that's a few months away. If I wasn't as addicted to this series and these characters in particular and Hawkins's writing in general, I'd be whining more, but now, I wait.

If Natalia Cruz was the proverbial lamb who not only lost in the woods but being led to slaughter in the series starter, Violent Delights, she's slowly but surely beginning to escape the darkness of her cocoon that kept a slew of harsh truths hidden from her. She may not have the wings that she believes will aid in her freedom from captivity, but she also is starting to not merely take every single thing thrown her way and accepting it as gospel truth, hook, line and sinker. Her mind recognizes that Cristiano de la Rosa is not a good man--that he truly holds her life in his hands--but her heart wants to believe there may be hope for their life together. Not all stories have happy endings.

A quick FYI: the White Monarch series MUST be read in order. There are cliffhangers in both books one and two AND the wait for the third one is about five months, so patience needs to come into play. Yeah, that could very well feel like forever, especially when it's a story like Natalia and Cristiano's, but if you're familiar with Jessica Hawkins's work, you'll know that she rewards her readers' patience with the sort of ending that they and her characters deserve. Violent Ends had my heart thumping and my blood thrumming and while I may have had my inhaler nearby in case all that excitement got too much for me, I wouldn't have had it any other way. This snags five stars. ♥

Read my reviews for the White Monarch series: