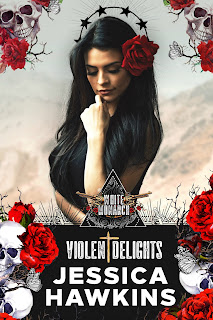 There's a reason why Jessica Hawkins has been called "the queen of angst" by many readers, and if you've never experienced her writing for yourselves, then the beginning of her new series is an opportunity you shouldn't pass on. Violent Delights is the first in Hawkins's White Monarch series, and it really is delightful and darkly so! If you haven't picked up on what I'm trying to say--especially if you aren't familiar with this author's books--what I'm basically highlighting with this series starter is that it is a dark romance, so don't go into expecting cutesy and flowery moments and exchanges. If you are a fan of well-written stories that have bite (and no, I'm not talking about paranormal romance involving vampires or werewolves) and may cause you to read non-stop for two to three hours, then I highly encourage you to peruse Violent Delights.

Natalia Cruz was a rose among thorns, but the thorns she was surrounded by were deadly. She was born into a life she wanted nothing of and she became a pawn in a battle between two brothers, Cristiano and Diego de la Rosa. I'm stopping myself from giving more details because, as is my personal policy when it comes to stories that have a suspense element to them, the fewer the details, the better for anyone reading a review but yet to read the book being reviewed. The story is told mostly from Natalia's point of view, with a chapter each told from Cristiano's and Diego's viewpoints. Yes, this does end in a cliffhanger, which isn't all that shocking considering it is the first in a trilogy, but the cliffhanger itself? Oh my... Let's put it this way: the three-month wait for book two has me antsy already. This Violent Delights has me wanting to go a tad violent with its end. See what I did there? Let the waiting game begin for this five-starred read. ♥