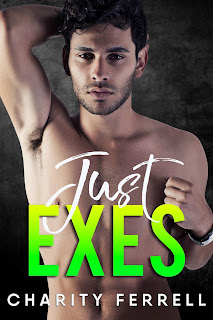 Just Exes is the third book in the small town romance series from Charity Ferrell entitled Blue Beech, and it's a second-chance romance with a whole lot of angst--and yep, the angst addict in me was a very happy camper. Lauren Barnes is all for using cuffs for a fun time, but when it's your ex slapping the cuffs on you while you're being accused of being an arsonist? Yeah, not so much. Gage Perry is simply doing his duty as a police officer, but he certainly isn't going to lose sleep over the ex-girlfriend that smashed his heart into smithereens and thought nothing of their plans post-high school graduation. It's been years since Gage last stepped foot in Blue Beech, but with his father's health problems and a need to get away from everything he left behind in Chicago, returning to his home town was necessary. When everything ended between the two of them all those years ago, neither Gage nor Lauren ever thought they'd get a chance to be together again--not with how they had left things. But even if they take that opportunity to be together again, ghosts of their past, particularly Gage's, continue to haunt them.

This book is tied for second spot alongside the series starter, Just Her Bodyguard, as my favorite in the series. There was nothing simple about Lauren and Gage's breakup, and while I'm not a fan of breakups that have one part of the couple making a decision based on what they believe is best for the other person, there was a bit of a twist to Lauren's motivation for ending things with Gage when they were teenagers. I loved the tension these two shared, even as Gage was dealing with his feelings of anger and hurt stemming from Lauren walking away from him before. Between the two of them, Lauren was the one who seems to have had an easier go of things because Gage's past in Chicago was heartrending. There was one point in the story were a development was made regarding something he had left behind and I could feel my heart squeeze painfully in my chest as he was waiting for confirmation. Sigh. I loved reading this book, and the only hiccup had to do with how Gage seemed to go out of his way to help Lauren out in the beginning even though he claimed to still hate her. Still, Just Exes hit just the right spot and gets 4.5 stars. ♥