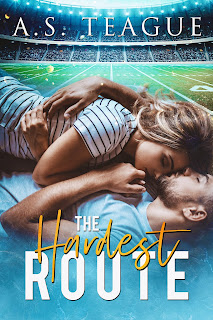 A.S. Teague is back with a brand-new standalone--although I certainly wouldn't mind this being the first in a new series or if even one particular couple gets their own book, but I digress--and it's a strangers to one-night stand participants to co-parents to friends to lovers story. Did you get all that? That may sound overly simplistic but The Hardest Route is far from being a simple sports romance. It isn't exactly a light read either. This one's got drama and angst and a whole lot of it, especially in the last quarter or so of the book.

When thirty-year-old Brooke Spires accompanies her best friend to Las Vegas, hooking up with a newly drafted professional football player for the Chicago Bears who also happened to be more than seven years her junior wasn't exactly on her itinerary. Two months later and Brooke reaches out to rookie player Griffin Rockwell, and all it takes is two words for Brooke to knock Griff's world off its axis: "I'm pregnant." As the years past, the two forge a friendship and pact to be the best parents to their daughter, Allie. It dawns on them that maybe what they have could be more, but then shocking news threatens their family and future.

This was a good read, and well, I do love me some heavy angst so you won't be getting any complaints on my end. I did like that these two forged the sort of relationship that had them putting their roles as parents to Allie ahead of anything and everything else. Now, as far as their friendship goes, it did seem like they truly did have a genuine one that wasn't based on secret pining for each other, which is why the turnaround into wanting more felt a wee bit sudden and took a whole lot of cajoling from their respective friends for them to realize that maybe they were meant to go beyond the platonic. The supporting cast were a hoot, especially their best friends and Allie. So, it's rather easy to give The Hardest Route four stars. ♥

Purchase The Hardest Route on Amazon.