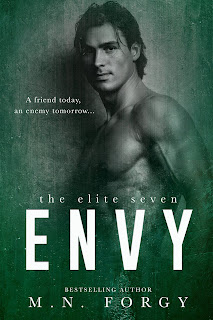 We're more than halfway through the multi-authored Elite Seven series, and M.N. Forgy's Envy has just edged out the first three and has become my favorite among the currently available novellas so far. This felt the most different among the books, the one that had no romance but had a rawness to it courtesy of a main character that had almost no redeeming qualities to him. Who says a villain can't be a compelling titular character in a tale as twisted as the one Forgy has weaved together? Sebastian Westbrook is a force to be reckoned with...that is, until he forces his way into the much whispered about Elite and places himself in the cross hairs of the powers that be.

Sebastian Westbrook wants for nothing, or at least he shouldn't want for anything since he has everything. Everything, that is, except whatever catches his fancy and wants to claim for his own. What he wants most, though, is to have a girl that is his and his alone, and once he gets to St. Augustine's, his attention zooms in one girl in particular: Sabella Gunner. Once he becomes part of the Elite, everything should come even more easily his way, but nothing connected with the Elite is ever simple nor do they give anything without strings attached. He may be willing to do anything to get what--and who--he wants, but what happens when that proves not enough for him?

This was, by no means, a romance, which makes me wonder why it's cataloged under New Adult and College Romance. Sebastian is a sociopath, plain and simple, and like many a-sociopath before him, he uses a charm offensive on those around him, particularly his prey. Does the guy have any redeeming qualities? Maybe if you consider his feeling brotherhood with the six other members of his batch in the Elite; however, the things that he did could very well have me stepping back on my saying that he has "almost" no redeeming qualities. He doesn't. Maybe what happens beyond the cliffhanger ending will give him absolution...or maybe not. Five stars go to Envy. ♥