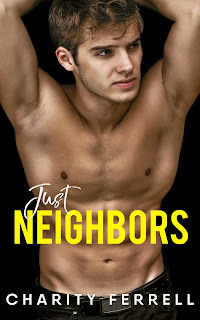 Just Neighbors is the fourth book in the Blue Beech series penned by Charity Ferrell, and it's an enemies-to-lovers romance featuring--surprise, surprise--neighbors who happen to have a history between them: print journalist Chloe Fieldgain and police officer Kyle Lane. They have a routine every single morning: he greets her, she tells him to fuck off. The animosity she has towards him is based on something he did to her when they were in high school, and it's something that he's never really apologized for but a lot of that has to do with the fact that she's never wanted to hear him out. Now that they're neighbors, you'd think they'd be mending fences, but Chloe would rather knee him where it hurts and Kyle goes out of his way to push all her buttons. But when Chloe ends up drunk on the same day that her cheating ex is set to marry, it's Kyle who helps her out. Slowly but surely, the ice around her melts, and he takes the opportunity to fully pursue the girl he's crushed on since high school. They're falling for each other, but will Kyle still want to be with Chloe once he finds out the dark secret she's been keeping for years?

This was a good read, one that had a fair amount of feels to it. I think Chloe and Kyle did have chemistry and shared a connection that made it feel as if they were a couple that could surpass certain trials. I did find it weird, though, why Kyle constantly found a way to tick Chloe off. He was the one who did what he did back in high school, so why was he acting like a kid in kindergarten pulling the pigtails of the girl he liked? Then there was the secret that Chloe had kept, and while she was the one at fault, there was a point where she seemed to mock Kyle and how he was making a big deal out of it. Ummm, I'm sorry but what Chloe did WAS, indeed, a big deal, plus they really should have discussed it more than they did in the book. Other than those two things, I did like the romance and I loved the interactions they had when it came to Chloe's fourteen-year-old nephew, Trey, and four-year-old niece, Gloria. There was one part that was particularly heartbreaking, but I do understand why it was part of the tale. Blue Beech's proven to be an entertaining small-town romance series. I'm giving four stars to Just Neighbors. ♥

Just Her Bodyguard (book one) - four stars - My Review