Review: All Souls Near & Nigh by Hailey Turner (Soulbound #2) 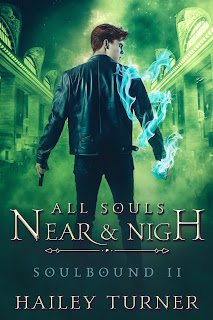 Behind the safety of his shields, Patrick dug deep into his scarred soul for that shining, resilient link that bound him to Jono. He refused to reach for Jono's soul and use it to draw external magic from the ley lines and nexus buried deep beneath the earth. That power wouldn't help him here, not bound by the promise he'd made.

But he could make sure the soulbound stayed wide open between them.

Find me, Patrick thought as he reached for one of the white pills with its pinprick of red-black in the center that Tremaine held out to him. You have to find me.


If I had any sort of worry about Hailey Turner being a one-hit wonder, her second Soulbound novel demolished it to smithereens. I know this author's got a whole 'nother series that readers have been raving about, but I've only ever read the books in her Soulbound series--but yes, I do have the other books on her back list on my never-ending to-be-read list. While A Ferry of Bones & Gold made me sit up and take notice, All Souls Near & Nigh had me standing up and applauding. Turner's an author whose brilliance when it comes to urban fantasy seems to know no bounds.

Supernatural Operations Agency's Special Agent Patrick Collins's cup runneth over, and not in the best of ways. Like the transfer to New York and getting a firmer hold on his new relationship with werewolf Jonathon de Vere wasn't enough to deal with, Patrick finds himself smack dab in the middle of a battle over territories between vampires and werecreatures AND an influx of a drug called "shine". Oh, and did I forget to mention the gods that have no qualms playing around with Patrick's fate in order to call him on his soul debt? Fun times abound. Okay, not really.

A quick reminder for those of you who are new to Soulbound: this series MUST be read in order. Good news, though, because book two does not end in an evil cliffhanger; it's actually got a happy-for-now ending. That being said, this better NOT be the end of this series because I've grown rather addicted to it, and Hailey Turner seriously needs to give me my next fix as soon as humanly possible. I need more Patrick and Jono, damn it! To have a better understanding of why I'm stuck on them, read the Soulbound books asap. Five-plus stars for All Souls Near & Nigh. ♥

Read my reviews for the Soulbound series:

Pre-order All Souls Near & Nigh on Amazon.