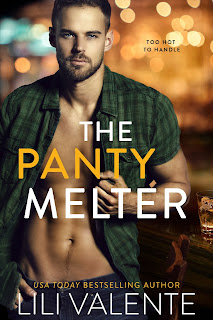 Lili Valente's fourth--and what I'm guessing is the final--novel in her Hunter Brothers series was the perfect way to close out this fabulous foursome of romantic comedy fiction. The Panty Melter features the eldest among the brothers, forty-five-year-old Deacon Hunter, retired twenty-five-year military veteran and now heading a crew of volunteer firefighters and single father to his twin sons. He's paired up with forty-year-old Violet Boden, single mother to three daughters and a highly valued employee of Deacon's brother. She's done with domineering alpha males who think they know better and as drawn as he is to her, he's not entirely sure if she's worth frustration. Then they begin to see sides of each other that make them realize that there was more than their first impressions. They could build something real with one another--that is, until they make a discovery that may change everything.

Was Deacon an alpha male who took the reins with or without permission and thought he knew better? Yep, but it had more to do with the fact that he was the one who was more parent than his own father towards his three younger brothers and all those years in the military made him even more of a grumpy hard-ass. The guy went above and beyond for those he cared about, never hesitating to protect them whenever and wherever. Violet made certain assumptions, and while some were spot-on, there were some that she had made based on her not-so-great experience with her ex-husband. I liked that these two struggled to find their footing and that they had issues because it made them feel real. I don't need my romance novels to be all tied up with a big bow on top and have the main characters have perfect lives, and Deacon and Violet were not perfect but they fit perfectly together.

One of my favorite things about this book has to do with Deacon and Violet actually living separate lives prior to becoming a couple. It's not as if they were completely missing out on major things like love and career. These two had those plus they created their own families while also having the support of their respective circle of immediate family and friends. I also loved that they were in their forties and while there's a degree of maturity to being in your forties, they also knew how to simply let loose at times and kick back and have fun. As always, Lili Valente has brought together a great balance of romance and comedy while also inserting enough angst to satisfy even an angst-addicted reader like me. There was a good flow to the story and the cast of characters were beautifully developed as the book moved forward. The Panty Melter was the perfect way to end my day. It receives five stars. ♥