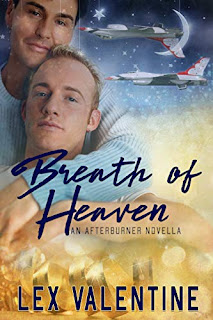 Breath of Heaven is the sequel to Afterburner, both novellas penned by Lex Valentine. Before you continue reading this review, allow me to give you fair warning that details I mention here may be considered spoilers if you have yet to read the first book. With that out of the way, let me get on with my review... This second book still features the same couple, only this time, Sebastian Marchetti and Ryder Beckett are now husbands--making the latter Ryder Beckett-Marchetti. This takes place about two years after the end of the first book, and while the Bas and Ryder continue to bask in their love and are secure in their marriage, tragedy strikes, leaving Ryder's older brother Ryan a widower and single father to four-year-old Levi and newborn Cameron. Ryan makes a shocking that leaves Bas and Ryder reeling but needing to cling together.

I'll be honest: I wasn't as big of a fan of this novella as I was of the previous one. This takes place about a couple of years after book one, so Ryder should be about forty and Bas forty-two. Since Ryan's older than Ryder, I'll put him in his early forties. Now, I get that there are quite a few hockey players who go on to still play well into their forties, but Ryan's change of circumstances on the family front and then choosing to do what he did gave me pause. Why couldn't he retire? I doubt that he was receiving chump change, so I would think he had a good nest egg. It's also mentioned in the book that his late wife must have trust funds set for their sons as well. So again, why go the route that he did? Does it make him selfless or selfish? I'm still wary about how the whole Ryan-Levi-Cameron thing played out. As far as the romance between Bas and Ryder goes, it was still good, albeit much weepier and angst-ridden. Three stars for Breath of Heaven. ♥

Purchase Breath of Heaven on Amazon.