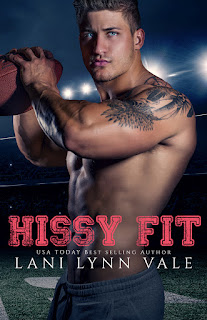 “Do you know what it feels like to be invisible?” I asked softly.

“Because I do,” I continued, taking over him. “I know what it feels like, because I fought tooth and nail for you to see me since the first time I saw your face, and you never saw me.”

Lani Lynn Vale has just launched a new series, and goodness me, but I do believe her The Southern Gentleman series starter is my favorite book from her...so far! Making me laugh is par for the course when it comes to Vale's books, but Hissy Fit took things to a whole new level. This book brought me to tears, both with the Vale-patented humor and heavier moments that brought the angst and drama that I'm addicted to. If the rest of the series is as good as--or even better than--book one, this could end up knocking the author's Bear Bottom Guardians MC series down a notch and overtaking it as my numero uno Vale series.

What happens when the girl with the reputation of being a walking disaster and bringer of bad luck and the hometown sports hero and Mr. Popularity finally cross paths? Well, that's what Hissy Fit is basically about. Raleigh Jolie Crusie has been crushing on Ezra McDuff for years. Their families are lifelong residents of Gun Barrel, Texas, but while Raleigh has been aware of Ezra existence ever since they were children, Ezra's attention was only caught when his industrial-sized box of condoms smacked Raleigh in the face in Target. So, is it any wonder that Raleigh isn't quite sure what to make of Ezra's interest in her after all these years?

My heart ached for Raleigh, especially as she recalled all those times that she pined for Ezra and he didn't even know of her existence till the whole Target incident. She was, for all intents and purposes, the invisible outsider, and then her reputation for being like this harbinger of disaster was just terrible, although to be fair, it did seem like she was a magnet for the not-so-great stuff. Raleigh also had this deep, emotional back story that I could be empathize with and recognize parts of within myself. Never has a Lani Lynn Vale-created female main character affected me as much as Raleigh Jolie Crusie did, leaving a vivid mark on me.

I adored Ezra as well! Yes, the guy was basically clueless as far as Raleigh's existence was concerned, but let it not be said that he didn't make up for all those years of cluelessness by showering Raleigh with attention and affection plus lots of love and lust to boot. Another thing I loved about this book had to do with both Ezra and Raleigh being the kind of educators that they were. Teachers hold a special place in my heart because of the influence of a select few plus my own years spent as a teacher, and these two and how they were with their students had my heart thrumming happily particularly when it came to Morgan Leigh Brice.

There's a whole lot about this novel to love, and to be honest, I'd be hard-pressed to name one thing about it that I didn't like, and that's with me being all nitpicky, too. Lani Lynn Vale did an absolutely fantastic job creating a story and characters that I feel many readers will be able to relate to. Everything about this was developed really well and the story paced in such a way that I felt that I got to know both Ezra and Raleigh and that there was nothing about their journey that was left unresolved. The sneak peek at book two has me excited to get my hands on it, but for now, I shall bask in the awesomeness of Hissy Fit. Five-plus stars. ♥