Review: Nothing Without You by Monica Murphy (Forever Yours #2.5 / Kristen Proby Crossover Collection #5) 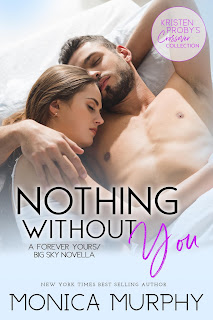 Nothing Without You is a novella in the Forever Yours series from bestselling author Monica Murphy AND it's part of the multi-authored Kristen Proby Crossover Collection from Evil Eye Concepts, Inc. You can read this novella independently of the other books in either series, so no worries if you're not familiar with Forever Yours or Big Sky, which is the Proby-penned series that this crosses over into. This is a second-chance romance between high school sweethearts Tucker McCloud and Maisey Henderson. When high school senior Tucker gets a football scholarship to a Division I school, he decides to quietly break up with his girlfriend, high school junior Maisey. Fast forward a nearly a decade and a half later and thirty-four-year-old professional football player Tucker is back in his hometown of Cunningham Falls, Montana to help his family celebrate his parents' fortieth anniversary. When he bumps into Maisey, he's taken aback by the clear hurt and anger directed at him. Seeing her again makes him regret what he did to her back in high school, but now is his chance to prove to his baking whiz that they deserve a second chance.

This was a fast-paced yet wholly entertaining novella. Tucker and Maisey were a great couple to get to know, and while I may have been hoping for a bit more groveling on Tucker's end, in hindsight, his reasons for breaking up with Maisey when they were teenagers may have been just what they needed to set them on the paths that they were on when they saw each other again. Funnily enough, there was one point in the story where I wished I could knock some sense into, nope, not Tucker, but Maisey. It was as if she made the choice that she did and then thought going to the anniversary party to make him see what he was missing out on was a good idea. It was rather contradictory and if she were a real person, I'd have probably gone all judgy on her, but all's well that ends well with these two, as it should! Overall, Nothing Without You left me quite satisfied indeed, and it receives 4.5 stars. ♥

Read my reviews for the Forever Yours series:

Thinking About You (book two) - four stars - My Review

Nothing Without You (novella) - 4.5 stars - My Review (posted above)

Purchase Nothing Without You on Amazon | Apple Books | B&N | Kobo.