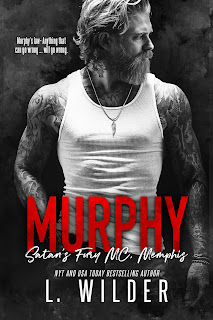 I'm quite addicted to L. Wilder's motorcycle club romances, and the fourth and latest release in her Satan's Fury MC: Memphis series is proof positive of just how adept Wilder is when it comes to this particular trope. Murphy is Satan's Fury's sergeant-at-arms and he lives by a set of rules that keep him on a path that's focused on his loyalty to his club and his brothers. The last thing he needs is to deal with an emotion like love, especially he wasted years loving someone and all he had to show for it was betrayal. Sure, Riley Nichols has caught his attention, but getting involved with the daughter of your firearms supplier is a bad idea. The fact that she's as attracted to him as he is to her complicates matters and soon, the two cross a line that could very well cost Murphy his heart and Riley her life.

Ooh, I love it when the women these guys from Satan's Fury are feisty and give as good as they take. Riley may only be twenty-four but she knows what she wants and she isn't afraid to go after it--or in this case, him--regardless of the consequences. She was exactly what someone like Murphy needed--someone to see him as Lincoln the man and not just Murphy the biker. There was a lot of tension in this story, some of it due to the connection that the couple shared, but most of it because of the goings-on involving the club and what Riley's father and brother were into. There was one particular part of the story that broke my heart and had me tearing up, and I may have needed a few minutes to gather myself afterwards. Still, Murphy was 4.5-starred winning read. ♥