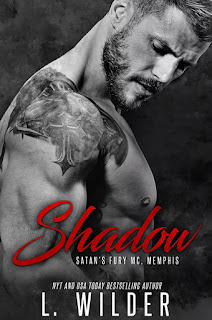 Bestselling author L. Wilder takes fans and readers back to Memphis, Tennessee with the release of the second novel in her Satan's Fury MC: Memphis series. This needs to be read after the series starter, Blaze, because there is a hint of a back story that crosses over between books. However, if I'm being honest here, Shadow did work out rather well as a standalone, and even with one particular incident in book one that plays some sort of part here in book two, I felt that it could be read independently of its predecessor. But hey, read both books, anyway, because they're both really fab motorcycle club (MC) romances and worthy spin-offs of the original Satan's Fury MC series.

After the loss of the club's enforcer, Shadow is voted in by the brothers to take Runt's place and he vows to carry on their late brother's legacy. All the darkness that he's tried to tamp down comes to the surface, working to his advantage when he's tasked to break someone down for vital information. When he isn't in the clubhouse, however, he finds solace in the pages of a book in a quaint bookstore in town. He's become a regular of sorts, one who's caught the eye of recent owner Alex Carpenter. The two are drawn to one another, but will either one of them want to stick around with the other when the darkness of their pasts as Mason and Alejandra are revealed?

I discovered L. Wilder's writing by way of her Satan's Fury MC series, and I continue to remain a fan because she's proven to be more than adept at creating intriguing MC romances that leave me hoping for more. We're only two books into this spin-off series, but so far, I've been both happy and satisfied with the stories that Wilder has written and the direction that the series appears to be headed towards. As always, that mix of romance and suspense strike a fine balance of sorts, and both Shadow and Alex were easy to get behind, their love story one that almost feels like it had been destined to happen sooner or later. 4.5 stars go to Shadow, and I cannot wait for book three! ♥