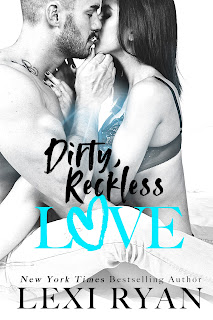 Ooh! I do love it when an author throws a curve ball of sorts in an ongoing series! Lexi Ryan's third novel in her Boys of Jackson Harbor series certainly has the romance and drama that I've come to expect, but there's also a fair bit of mystery and suspense added into the mix, making for highly intriguing read. This series is proving to be a truly addicting one, and with each new story, Ryan ensures the Jacsons will be difficult to get over.

Book three is entitled Dirty, Reckless Love and the spotlight is now on Levi Jackson, who's been in love with Ellie Courdrey for almost as long as he's known her. From the moment they met in Jackson Brews almost three years ago, Levi felt this connection to her, one that made him want to explore it further...that is, until his best friend walked through the door. While Ellie could have been the woman Levi had been waiting for all his life, Colton McKinley was the man she was waiting for in the bar--Levi's best friend was Ellie's boyfriend.

So, what's a guy like Levi supposed to do? He maintains his friendship with Colton while also forging one with Ellie. He becomes her sounding board when cracks begin to form in her relationship with Colton. He continues to love her, even when she tells him not to--even when she continues to choose Colton over Levi. And then the unthinkable happens and Ellie ends up in the hospital, badly bruised from an attack. The prime suspect is her fiancé Colton, but Levi doesn't believe his best friend would physically harm the woman he plans to spend the rest of his life with. Ellie can't give them answers either...not when she can't remember the last three years of her life.

I'm sure there are some who'll probably jump to the conclusion that there was cheating going on since Levi was in love with Ellie while she was still in a relationship with Colton. Without going into the nitty-gritty of the book and spoiling the plot, I'm just going to say that you need to read the book to have a better understanding and appreciation as to how everything happened and eventually worked out. There are quite a few things that go on and Ellie and Colton's relationship is complicated due to a good bit of secrecy on their parts and some nefarious goings-on from outside forces. I confess that there were moments I wondered if Ellie was taking advantage of Levi and his obvious affection for her, but there certainly was chemistry between them, and she did care for him, too.

The book is sectioned off so that readers see what state everyone is in presently before delving into the past in order to have a better idea what led to them being where they are when the book starts. I seriously liked the mystery suspense aspect of the story, especially since it kept me on my toes, coming up with a variety of scenarios as to what may have happened and who may have wanted to harm Ellie and where Colton could be. I appreciated that the author didn't make this one of those stories that had both main characters quietly pining away for each other while one was still involved with someone else. Ellie truly did love Colton and vice-versa, and Levi's love and loyalty for his best friend Colton made it difficult for him to believe that he could ever hurt Ellie. All this being said, I do hope that Colton gets his own happy ending later on. I'm giving Dirty, Reckless Love 4.5 stars. ♥