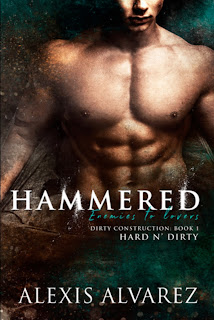 Hammered is the latest release from author Alexis Alvarez, and it's part of the multi-authored series of standalones entitled Hard n' Dirty while also being the series starter in Alvarez's own Dirty Construction. This enemies-to-lovers romance is about a journalist who also happens to be a volunteer for a small environmentalist group going head-to-head with the head contractor of a project that's encroaching on land that the Moorish Crane considers its habitat. They butt heads often but Talia Carlsson and Dane Carter cannot seem to stop from bumping uglies either.

When Talia trespasses onto the construction site that she's protesting, all she really wants is to have a face-to-face meeting with the head of the construction company. Unfortunately, he never seems to be available. Instead, it's some hot guy who she thinks is the head contractor she crosses paths with, and from the get-go, there's tension between them--both in terms of irritation and attraction. Maybe if Talia digs up enough dirt on the company Dane works for, they'll be able to shut the project down to save the cranes, but Dane is prepared to fight for the employees of the company, knowing too well how important each project is. Will anyone win in this battle of wills?

One of my favorite things about this book was that Dane and Talia were more than willing to go toe-to-toe with one another in order to not just get their point across but to stand up for something they truly believed in, sexual awareness and attraction aside. There was also the intrigue going on about who was in cahoots together. There were moments where I wasn't much of a fan of Talia's. However, Dane was a guy who wasn't all about making a profit, and the lengths he took in order to take care of those who worked with him made him an even better person in my eyes. I do think that the sex tended to overshadow the actual story at work at times, but I did find myself entertained in an overall sense, enough that I'd read the next book in the series. Hammered gets four stars. ♥