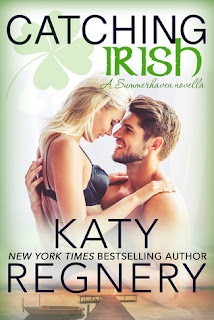 Katy Regnery wraps up her Summerhaven series with the story of the Finian Kelley, cousin of the Haven siblings, Rory, Ian, and Tierney. In New Hampshire to help out his cousins, as well as his aunt and uncle, with the running and maintaining of Summerhaven Event and Conference Center, Fin is keeping busy. The doesn't mean, however, that he doesn't miss his family and his life back in Ireland. With a few months to go before he needs to fly back to the Emerald Isle, it certainly wouldn't make sense for him to go meet a woman he ends up making him want far more than a temporary thing. But see, all charter boat captain Tate Jennings has always been in the market for is temporary. She doesn't believe in love and she doesn't do commitments. All she needs is to get the deed done with the guy of her choice and she's a happy camper. Sure, her hook-up with Fin was absolutely hot, but that's all it was--a hook-up. She isn't going to demand for more, and she definitely doesn't want him to demand for more from her. He's leaving anyway. So why does Tate already Fin's loss each time they decide to walk away from each other?

This novella was a quick read, but that doesn't mean that it didn't have a good story to tell on this limited number of pages. Just like the three novels before it, this one had a unique love story, and Fin and Tate were definitely a match that had me both frustrated and satisfied by the end. I say frustrated because it was as clear as day that these two shared a connection, but while Fin may have been willing to acknowledge it and go for more than a one-time thing, Tate was adamant about not coming back for seconds. Yeah, right. Obviously, she was hooked but she wanted to pretend Fin was nothing more than a hook-up--a repeat hook-up at that--for as long as possible. There was a lot of back and forth, but that all-important chemistry remained constant all throughout. Even with my frustration over Tate, I must confess that I absolutely loved how Kate Regnery chose to resolve the fact that Fin's home was in Ireland and Tate was not budging over being in the Florida Keys, especially given her charter boat business. It was the perfect happy-for-now ending that Fin and Tate deserved. Catching Irish easily snags 4.5 stars. ♥

Read my reviews for the Summerhaven series: