Review: The Charm of You by Jennifer Probst 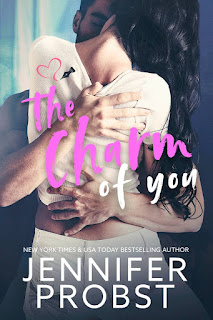 Jennifer Probst has a brand-new standalone set in the Ladies Who Write (LWW) universe, and it's the story of a billionaire scorned as a girl and gets her revenge as an adult on the boy who humiliated her a decade ago. When Nolan Banks decides to quit his job on Wall Street and to buck tradition by opening his own brewery and bar in his college town, he knows it's a risk but it's one he's more than willing to make. He knows to expect a bit of pushback from his older brother who also happens to own his own bar in the very same town, but what he doesn't expect is to be floored by the presence of a gorgeous woman named Presley Cabot. However, the cool, calm, and collected billionaire doesn't seem as taken by Nolan's charm as other women have been in the past. She's flirty but doesn't hesitate to put distance between them, but Nolan's taken by Presley's look, intelligence, and confidence to say exactly what's on her mind. What he doesn't know, though, is that he's met Presley before, and while she may have been smitten by him back then, she's got more vengeful thoughts this time for the guy who break who heart.

The Charm of You brings both the charm and the romantic comedy feels. Presley was a woman who had backbone, but it was easy to empathize with her when her old insecurities crept up, especially given just how much what happened between her and Nolan still haunts her. Nolan, though... Let me put it this way: don't judge the guy too quickly. There's an honest-to-goodness story here about how everything went down, and I must admit, I was taken by surprise. We see certain parts of that evening from Presley's point-of-view via flashbacks, and I totally understood why she was as broken about it as she was. Suffice it to say that not all, however, is what it seems. Wink, wink. There was a definite connection between both Nolan and Presley, but I did find it strange that he couldn't recall who she was even after she told him her name in the bar given that they had more than that one interaction when they slept together ten years ago. Overall, this standalone was a sweet read, one about the importance of seeing beyond the physical and knowing when someone is worthy of a second chance. Four stars. ♥

Purchase The Charm of You on Amazon | B&N | iBooks | Kobo.