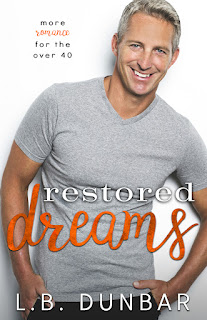 Restored Dreams is the third novel in L.B. Dunbar's #sexysilverfoxes series, but you don't necessarily need to read the first two books in order to understand and enjoy this newest one. Both main characters were introduced in the second novel, and there was already a hint that there was a fair bit of history between them. Now, forty-five-year-old garage owner and single father Bronte Austen Paige--aka Brut--and forty-one-year-old bakery owner Lily Warren may finally got there chance and restoring dreams they've long believed to be nothing more than broken.

More than two decades after Brut betrayed Lily in the worst way possible, the two erstwhile lovers find themselves in the same vacation home by the beach. Whether it be due to a bit of matchmaking on the part of Brut's younger brother and sister-in-law, neither Brut nor Lily knows if they should be thanking them or not. But maybe these next few days will help them get closure on what happened more than twenty-two years ago...and maybe even earn them a new beginning. But when their past comes calling, is it a sign that some things should simply be left alone?

This book was, by far, my favorite among the three in the series. There were far fewer distractions and the flow of the story seemed to be smoother compared to the other two books. Brut and Lily as a couple also came off as one worth rooting for, and as individuals, they appeared to have their acts together. As always, the encompassing theme of finding true love in one's forties and fighting for that love remains, but this had less whining and pussyfooting, thanks to Brut and Lily knowing when to let go and when to hold on. Four stars for Restored Dreams. ♥