Review: Something About Us by Riley Hart (Saint & Lucky #2) 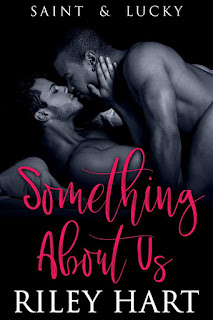 When Lucky Holloway and Saint St. Claire's story had more of a happy-for-now ending, I had a sneaking suspicion we were going to get a sequel, and now it comes in the form of Something About Us, the second in Riley Hart's Saint & Lucky duet. Lucky and Saint met and fell in love in Lucky's hometown of Cottage Grove, Virginia, and there story continues as they make the move to Saint's home base, Los Angeles, California. Falling in love is one thing, but neither could have imagined just how much harder it would be to face all the changes staring them both down.

The shine and shimmer of LA has Lucky feeling like a duck out of water, and while he knows that Lucky is there to give him all the love and support that he needs, he's more than aware that he needs to have a firmer footing in the brand new world that he's in. He gets a new job and may even have found a couple of potentially good friends in the mix, but Lucky is still hesitant to be as out and proud as his boyfriend is. Having owned up to his bisexuality because of his feelings for Saint is a whole different animal compared to fully embracing it in private and in public.

Saint is more than aware of how difficult it must be for Lucky to leave his family behind in Virginia and start over in California. A new relationship and a new place to call home on top of owning your sexuality could be putting a strain on their romance, but Saint is in this for keeps and the last thing he wants to do is pressure Lucky. But when their issues go unaddressed or get swept under the rug, lust and love can only get both Saint and Lucky so far. Will they be able to work everything out and get their happily-ever-after or will their differences force them far apart?

Lucky and Saint have certainly taken a lot more than other new couples like them. Lucky needs to learn to be comfortable with who he is and not constantly fall back on how things were when he was Tyler. On the other hand, Saint losing the grandmother he only spent a handful of weeks with hasn't fully hit him as of yet. While their relationship may seem to be doing well, there are aspects of their individual lives that still seem to be in limbo. Riley Hart did a great job with this story of what happens after love is found. Something About Us garners 4.5 stars. ♥

Read my reviews for the Saint & Lucky series:

Purchase Something About Us on Amazon.