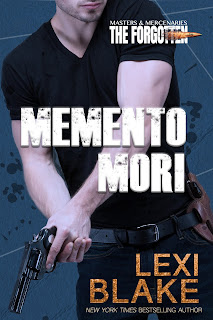 Lexi Blake's starts off her much awaited Masters & Mercenaries: The Forgotten with Memento Mori. The series features six men who were part of a group who were experimented on by a Dr. Hope McDonald, a woman they were made to call "Mother", but that's nothing compared to everything else she had conditioned and trained them to do. The series also includes the man who becomes their leader of sorts, tasked to keep them safe and to help them get answers to too many questions plus try and uncover any and all the information they can when their memories were erased. Then there are the more familiar characters from the author's other series, namely, Masters & Mercenaries and Nights in Bliss, the latter written under Blake's Sophie Oak pseudonym. I'll say more later on whether this new series starter works well as an independent read from the aforementioned two series; what I will say is that as the beginning for this new set of romantic suspense books, well, it definitely hit the mark!

Jax Seaborne was born in a lab, his memories systematically erased by a woman whose methodologies and mission were self-serving at best. He may have been freed from that prison, but his lack of a past and with an unclear future, Jax can't help but feel as if he's still imprisoned by his circumstances. He has his five brothers by his side, five men who went through the same thing that Jax did and came out of it still standing albeit quite lost. When their team locates The Ranch, a testing facility located in Colorado that may hold the drugs that altered their memories and possible pertinent information about all the test subjects, they head over to a quirky town called Bliss under the guise of being a production team set to make a documentary. They need the aid of a guide to get to the area where The Ranch is located, and no one knows their way around the nearby Colorado wilderness better than River Lee. Jax and River connect like missing pieces of each other's puzzles, but will Jax's past cost them both?

Remember earlier, when I mentioned that there were other characters from the author's other series that make appearances here? Well, the Masters & Mercenaries: The Forgotten series is a spin-off of the original and widely popular Masters & Mercenaries books, and that being a series I have yet to read, I confess that there were moments where certain past events were mentioned in this series starter that I felt a wee bit lost. Do I wish I had, at the very least, read the book where Jax and the other Lost Boys were introduced? Hell yeah, but it is what it is, and thankfully, even without having read that book in particular or the series as a whole, I was still able to sufficiently enjoy this first book. Lexi Blake kept me on my toes, giving very little away so that when certain things were revealed, they had more of an impact on me. I liked Jax and River and the direction their love story went, and the rest of the guys definitely have me curious, so I'm already excited for book two. Memento Mori gets 4.5 stars. ♥