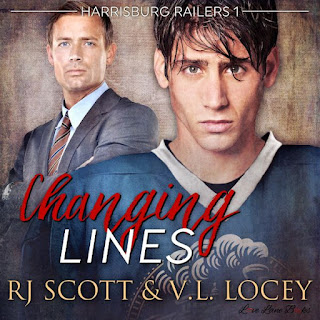 Note: The audiobook was provided by the authors via Signal Boost Promotions.

I originally read Changing Lines a little over a year ago, having been a fan of both M/M hockey romances and RJ Scott's, I was both curious to see how she would do with the sub-genre and and how her new writing partnership with V.L. Locey would read like. This was the story of twenty-two-year-old Tennant Rowe, a talented hockey player who's proud of his fellow hockey-playing brothers but would love to know what it's like to be known for his own achievements on the ice. Being as young as he is, he also has to contend with teammates who have far more experience than him, making them more of the go-to than Ten. So when an opportunity to be traded is floated, he decides this could be a blessing in disguise. Sure, the Harrisburg Railers are an expansion team but they're in the process of making a name for themselves separate from the two more popular teams in their home state of Pennsylvania. Having James Madsen as the coach helps, especially since Mads used to play alongside Ten's oldest brother. But while Mads knows what to do with the Ten on the ice, his attraction to the young man ten years his junior has him hesitating. While Mads is openly bisexual, Ten isn't as far as he knows, and in as much as Ten wants to be part of his team's first line, becoming involved with his coach is crossing a line neither could come back from.

Now, while it may seem strange to some for romance lovers to listen to an audiobook that they've already read the ebook or paperback of, I prefer to think of it as a great opportunity to experience a familiar story via a different medium. It's kind of like re-reading. You already know the story, but you either want to experience all the feels that you did the first time around or see if it clicks differently the second time around. In the case of Changing Lines, which also happens to be the first in RJ Scott and V.L. Locey's Harrisburg Railers series, the story basically still hit me the way it did when I read it last year. Both Ten and Mads were likable main characters and their story was entertaining to a degree. But even with the always amazing Sean Crisden lending his vocal stylings to this, it still faltered in terms of the connection I always crave with the characters of any story I'm reading, listening to, or even watching. In as far as seeing Mads being a single father to his teenage son and Ten interacting with his family, my interest level was at a high, and same goes for when they were initially trying to find their footing as a couple, but that waned towards the second half of their story, so that has me rating Changing Lines 3.5 stars out of five stars. ♥