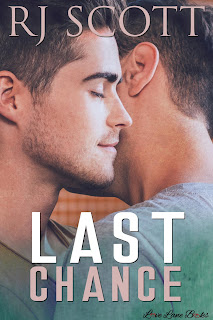 I originally read Last Chance when it was part of the multi-author charity anthology entitled Love for All Seasons, but RJ Scott's short story about two college students who shared one hot kiss when they were both freshmen only to spend the next few years acting as if nothing had ever happened deserved a re-read, and what better time to do so than with its release as a solo piece. This is the sort of read that you can get through in half an hour's time, and if you're looking for a quickie read that's sweet and surprising and has a happy ending that will leave you smiling.

First kisses are often sweet and special; a first kiss that leads to a hot make-out session? It's the sort of memory that stays with you, and it certainly has as far as Luke is concerned. Unfortunately, the guy he shared that moment with seems to have made it his mission to pretend no such thing happened. Both Luke and Justin were only freshmen back then, but now, with graduation on the horizon, these guys won't have to share the same campus anymore. Is four years too little too late for either one of them to even contemplate a final shot at making it right?

With as limited a number of pages as this story had, it still made for a good read. Even this second time around, I still sat back and simply let Luke and Justin tell me their story. For the twenty or so minutes it took me to read this, I once again found myself enjoying this, especially with how everything played out. There was no excusing how Justin treated Luke after their one time together, but the need to, at the very least, explain why things were the way they were without excusing it was a more mature approach. Last Chance by RJ Scott is a 4.5-starred cute read. ♥